Directed by
Genre
Almodovar's silliest film in quite a while 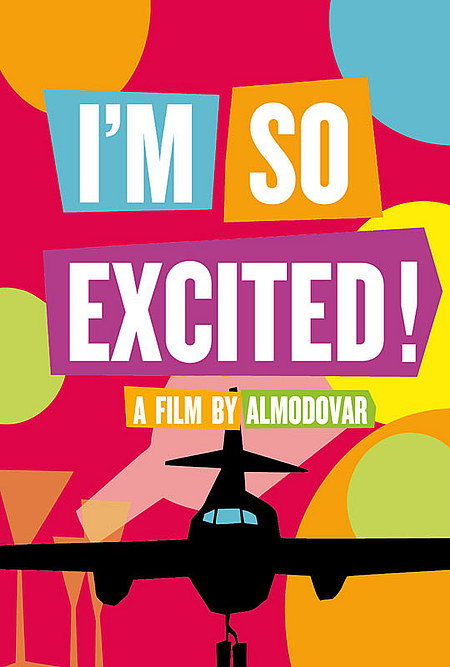 A moment of melodrama distracts the ground staff at Madrid airport, causing them to leave the chocks in place when a flight to Mexico takes off, damaging the plane's landing gear. Realising they are in trouble, the crew knock out all the passengers in economy class with sleeping tablets, and then the three senior air stewards attempt to distract the pilots and the passengers in business class from their perilous situation... largely by plying them with toxic levels of drugs and alcohol. Inhibitions gradually come down, and the crew and passengers begin to reveal their stories to one another.

I'M SO EXCITED is Almodovar's silliest film in a long time, a throwback to the anarchic, outrageous camp of his earliest films. Most of the film takes place in the cockpit and the small business class cabin, and as a result is driven by the characters and the cast. It's is a far cry from the disaster movies of the 1970's it ostensibly nods at, but is much less of a parody of them than the AIRPLANE! films.

Although the film can be read as an allegory of Spain's recent economic woes, with the privileged Business Class passengers engaging in irresponsible self-indulgence even as crisis threatens to overwhelm them all, it is certainly never foregrounded. A different ending might have made it more potent as political satire. Although there are a few dark moments, the film is mostly an absurdist comedy melodrama - the kind of film with which Almodovar made his name originally, before discovering a more mature side and becoming more "respectable". It shows that the themes of sex, sexuality and balancing the desire for meaningful relationships with a craving for hedonistic indulgence are still what fascinate Almodovar the most... an assertion that the tragic absurdity of the human condition persists, whatever the circumstances.

Compared to some of his more critically lauded films such as VOLVER, there is no question that I'M SO EXCITED is a light work, and its relevance or enduring appeal could certainly be questioned. As a reminder that Almodovar is still one of the most distinctive, creative and audacious film makers on the world cinema scene it is certainly effective, though.