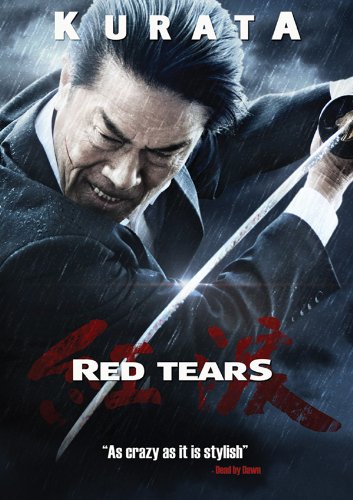 A series of grisly murders leads a timid young police officer into an investigation, but when he falls for one of the witnesses he uncovers a chilling secret, that the lone wolf maverick in his department seems to already know.

Yasuaki Kurata has certainly earned his place in the history of martial arts cinema, a memorable presence from the early 70's right through to the 21st century in both Japanese and Hong Kong films. If he wants to spend his twilight years producing and starring in low budget monster movies, we certainly have no right to judge him for it.

The film, however, I think we are allowed to judge, being a movie review website and everything. Sad to say it's not really a worthy vehicle for an actor of Kurata's stature. It's an action-horror-splatter sort of film, such as Japan is becoming quite renowned for, but despite the presence of special effects whizz Yoshihiro Nishimura and martial arts legend Kurata it's a rather tepid affair. It's low budget and trashy, which is hardly an obstacle to enjoyment in the genre, but it lacks the kind of mad creativity that often compensates for a lack of polish and technical wizardry. The plot is largely forgettable, the dialogue probably better forgotten, and the production values and visuals offer little incentive to keep one's eyes on the screen for the most part.

The only area where the film does rise above the truly mediocre is in the action and gore, and unfortunately there's just too little of either for a film in which they are the only real attractions. Too much time is spent on developing the story and characters, which don't really deserve it, with the occasional bouts of wire-enhanced action or blood-spurting gore really just emphasising their absence the rest of the time.

That's all up until the final reel, which is where the film finally starts to deliver - some quite enthusiastic action scenes lead to a climax which is sure to bring a smile to fans of Takashi Miike. The film is certainly no Versus though, or even up to the standard of the director's own low budget gem Hard Revenge Milly.

Kurata's undeniable presence helps to get the viewer through the scenes between the action, and the 87 minute running time never quite starts to drag, but it's one of those films where you honestly wouldn't lose much if you started it about 50 minutes in.