Directed by
Genre
Beautifully meditative take on the yakuza film 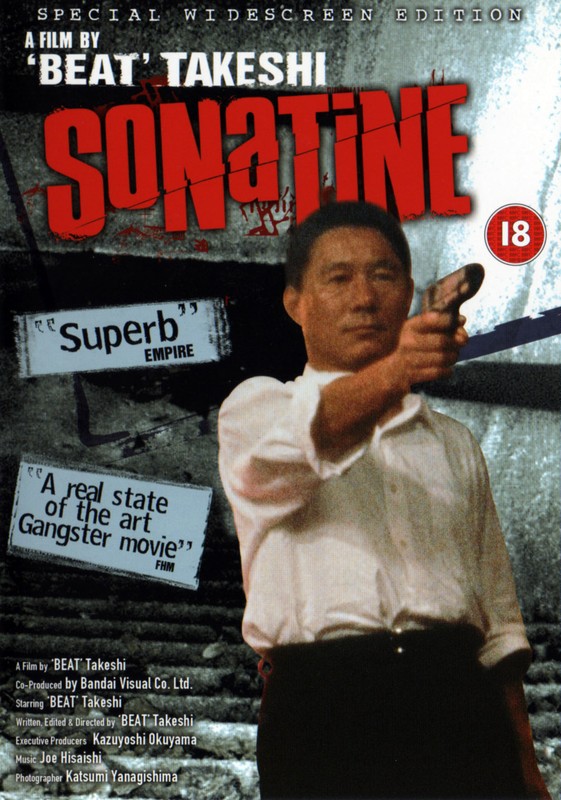 A low level Yakuza boss is commanded to take some of his men down to Okinawa to help an affiliated Yakuza group resolve a turf war with a rival gang. He is assured that unlike his previous mission, it won't be dangerous - just showing up should be enough to end the feud. When the group arrive in Okinawa they discover that the picture of the situation they have been given is at odds with reality, and that it may be dangerous for reasons they didn't expect.

SONATINE was one of the first Japanese films I saw, and came as a complete surprise when compared to the Hong Kong Triad films I was becoming aware of, or the English language gangster films with which I had a passing acquaintance. The film is distinctively Japanese, and even more distinctively the work of Takeshi Kitano. Kitano's understated style of acting is mirrored in his direction here... scenes of slow, tranquil beauty and haunting, stoic sadness are occasionally punctuated by flashes of mundane, brutal violence. Emotions are suppressed, as are words... silence and inaction are the primary means of expression.

In contrast to the melodrama and intensity of Hong Kong or Western gangster films, SONATINE reflects the rigid hierarchy of the Japanese Yakuza, and the drives of loyalty and honour that bond the men as brothers. In the upper echelons these concepts seem to mean little, but for the Yakuza foot-soldiers they are everything. Murakawa's loyalty to his boss and to his men leaves him in an impossible situation when they are brought into conflict, leaving him with only one course of action that can preserve his honour.

In between decisive moments, SONATINE is filled with a surprising ennui as the gang take refuse in a secluded beach house, where they pass the time by playing silly games which seem incongruous with the violence and death that seems to be stalking them. Kitano's quirky sense of framing and Joe Hisaishi's sumptuous soundtrack transform these moments from banality to beauty, making the brief moments of violence and loss seem all the more tragic and pointless.

SONATINE has something of a companion piece in Kitano's later film Hana-Bi - the two share some common themes and images, but taken together they show the change in Kitano's outlook and perspective that resulted from his near fatal motorbike accident between the filming of the pair.