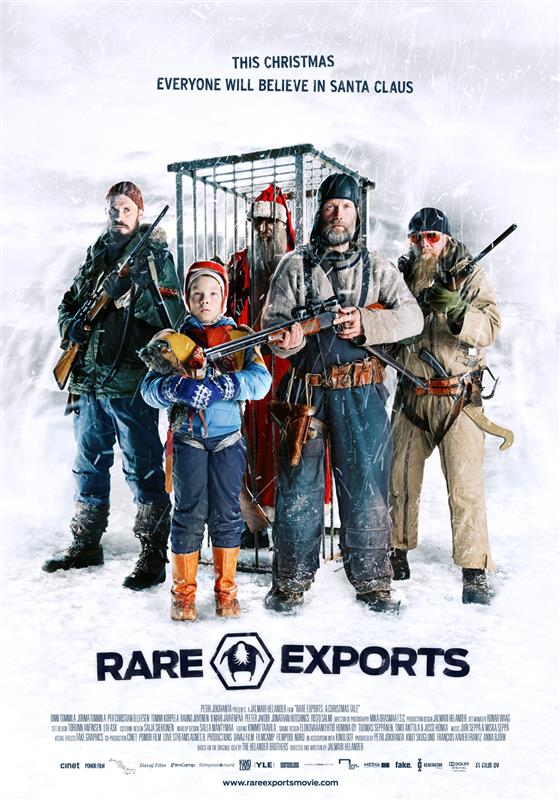 A group of tough, hardy villagers living in the remote mountainous North of Finland are preparing for the annual reindeer hunt, which brings them the food and the income that they need to survive the rest of the year - but discover that the beasts they hunt have already been slaughtered by animals. They blame the activities of a nearby mining operation for having let Russian wolves into their territory, and travel up to the site to demand compensation, only to find that the place seems to have been deserted in a hurry.

Only a young boy understands that it is not wolves that killed the reindeer, but that the blasting at the site has unearthed something altogether more terrifying... Santa Claus!

RARE EXPORTS reminds us that Santa Claus was not originally quite like the jolly present-bringing chap of the Coca-Cola company's advertising - it remembers that Santa knows who is 'naughty or nice', and the bad boys don't just have an empty stocking to look forward to on Christmas Day.

The film is quite beautifully shot, with the Arctic latitudes providing a stunning setting for the tale - note how quickly morning turns to night at this time of year! The folklore image of Father Christmas' malevolent alter-ego Krampus seem entirely plausible in a locale such as the real Lapland, providing a real sense of dread and terror.

The film somewhat squanders the dark, sinister atmosphere it has built up towards the end, though, taking a turn for the silly and comedic... I'm not entirely averse to the film having a happy ending eventually, but it seemed a bit of a shame that the very effective mood of quiet horror the film had managed to establish wasn't taken a bit further first.

Production values and performances are superb - I don't recall ever seeing a Finnish film before, and its always a surprise when a country you don't expect to have a film industry produces a work of such high technical caliber - a reminder that there is probably a mountain of great cinema (or at least TV) out there that English-speaking countries will probably never get to see - which makes this rare export (boom boom!) all the more appreciated.