Directed by
Genre
Another high school nightmare from Japan 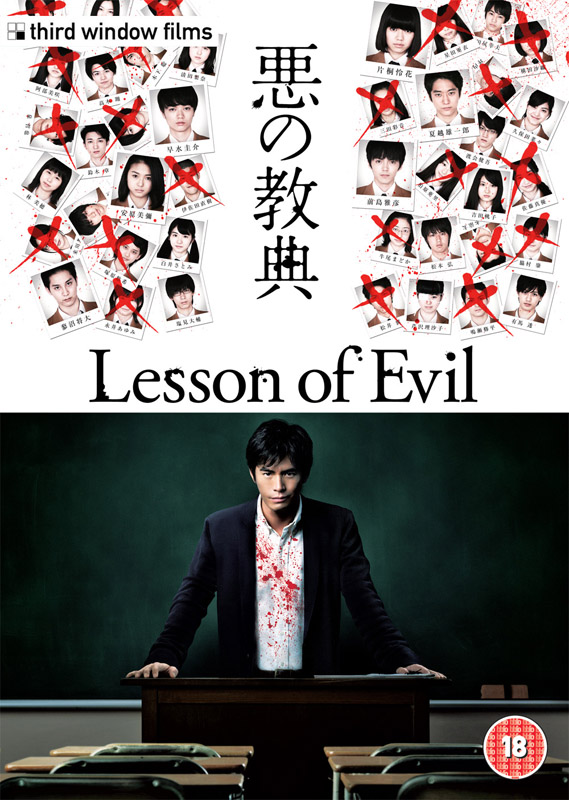 Hatsumi is a popular, confident teacher who seems to genuinely care about his students and have their backs whenever they have troubles - in school or out. However, after rescuing one of the girls in his class from sexual harassment by a fellow teacher he does not reject her when she perhaps confuses gratitude for affection, and she gradually discovers that he might not be the golden hero she had believed him to be. Meanwhile another teacher looks into Hatsumi's past, and uncovers some troubling questions.

LESSON OF THE EVIL is something of a return to Takashi Miike's "what did I just see?" style of film-making, but not necessarily in a good way - whilst Takashi Miike's films from about 1996-2004 dazzled audiences with their creativity, unpredictability and willingness to transgress boundaries you probably hadn't realised existed until he smashed through them, LESSON OF THE EVIL is certainly surprising and transgressive but seems to lack that core of visionary genius that suggests a director who knows exactly what he's doing and why he's doing it.

The film's structure is a little reminscent of Miike's hit Audition, in that audiences going into the film knowing nothing about it might not see the twist the film takes in its second half coming - though the foreshadowing is so much more blatant here its hard not to have an inkling, and unlike AUDITION there is no sense that there is some justice in the way the tables are turned. AUDITION flips a rather creepily misogynistic, patriarchal story into something of a feminist parable, but LESSON OF THE EVIL doesn't appear to have any such symbolic interpretation in its role reversals.

In a world without Battle Royale, LESSON OF THE EVIL might have made some impact with its depiction of the classroom as a war zone, but Miike's film lacks the rich characterisation and psychological depth of Fukasaku's masterpiece. Whilst Fukasaku's use of black humour made the horror of the situation all the more keenly felt, Miike more than once plays a brutal death for cheap laughs. In a world where school shootings never actually happened that might work, but recent history has too many incidents of real horror for this casual representation of it not to be in rather poor taste (not, of course, an accusation Miike is unaccustomed to hearing).

Takashi Miike certainly made his name with shocking films, but his festival success was not just due to the 'extremeness' of his films, as some critics and detractors might have liked to believe - there was always an intelligence behind the insanity, a method to the madness as it were. Superficially, LESSON OF THE EVIL might seem to fit right in with films like Ichi The Killer, but its all surface similarity - indeed there seems to be little but surface in the more recent film.

The film is not entirely without merit - it is certainly technically accomplished, if nothing else, and there are some sequences of genuine creativity to be found. As much as I'd love to say it is a return to form for the prolific director, it seems to be yet more evidence that Miike burnt out - quite understandably - around 2004/2005.