Directed by
7/10 - Messy but ultimately entertaining 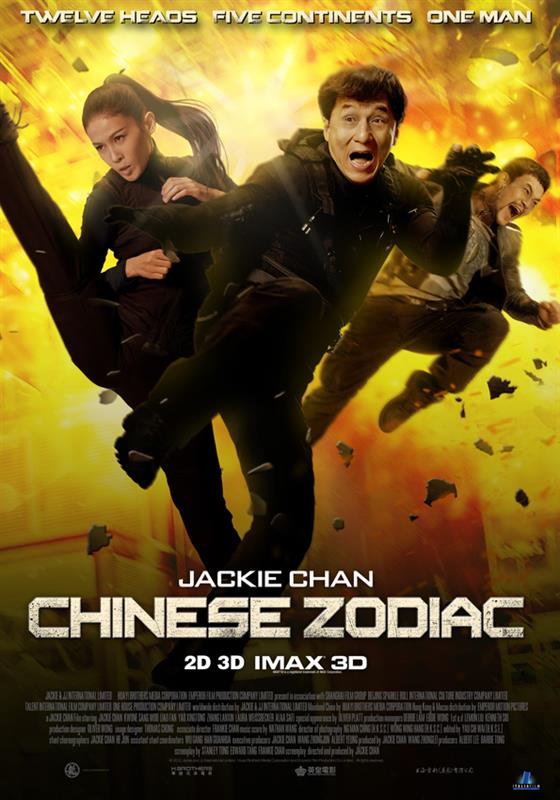 Mercenary treasure hunter JC (Jackie Chan) is hired by a villainous corporation to find and retrieve the long-lost bronze statues stolen from the Emperor's Summer Palace 150 years ago by foreign invaders, so that they can be auctioned for vast profits. JC sets off on their trail, weaseling his way into the company of an earnest "national relic protection society" (or something) to find out what they know about the statues, and then finding himself in the company of one of the original looters' descendants. Along with JC's team they all set off on the trail of an ancient shipwreck, where the statues were last all seen together.

CHINESE ZODIAC, or CZ12 as we are apparently supposed to call it, is essentially a sequel to Jackie's Armour Of God films, with Jackie playing a somewhat older but not (initially) much wiser version of his character from those films, in another international action adventure. Times have moved on since then, of course, and the new film shows the shift in the Hong Kong film industry towards catering for a mainland Chinese audience. Hence, the film is shot primarily in Mandarin (though there is a lot of English and French spoken) and features a script into which some heavy-duty nationalist sentiment has been gracelessly shoehorned.

Jackie Chan has come under an awful lot of fire in recent years for public statements which have been much derided for their pro-Beijing content, and certainly there is a feeling of toeing the party line in CZ12 that won't be found in his earlier films, but I'm not sure it deserves quite the level of venom that it has drawn in some quarters. More unforgivable is the crudity with which it is sandwiched into the film though - characters practically stop dead in their tracks, put on their moralising hat on and deliver some earnest statement about national pride or whatever.

It is just one of the tonal inconsistencies in the film, which veers from hi-tech heist thriller to action adventure to juvenile comedy throughout its running time. There are points where it feels like a kids film - the encounter with a gang of international pirates who might have stepped off the pages of a 50 year old comic book is particularly jarring, especially when it is followed (in due course) by a fierce fight between two of the film's female characters. It must be said that even in this fight Chan is keen to show a sense of sportsmanship and honour between the combatants - as with Gorgeous, in none of the film's fights does anybody seriously try to harm his or her opponent(s), and defeat is accepted with respect and grace.

Action fans may be frustrated for the first half of the film, as there is not a lot to be had after Jackie's first scene, which features some rather spectacular stunts in a "roller suit". Other than some acrobatics in which Chan is clearly relying heavily on wires (no great shame at his age), there is not a lot of action. Things do pick up towards the end, and the film's biggest fight scene contains plenty of trademark prop-based invention that ought to bring a smile to fans of classic Chan fights.

Indeed it was only in the second half that CHINESE ZODIAC started to win me around, really - when it starts to feel more like a proper Jackie Chan film. The tone settles down a bit and the plot meanders less, as the action content steadily increases, to a ridiculous but quite well done finale in the air above an erupting volcano.

The use of wires and CGI will doubtless disappoint or offend those who wish Jackie had stayed young forever or retired in his prime, but even though he can no longer rely on sheer ability, it must be said that Chan is still a master at staging and executing exciting action scenes. Unfortunately he has intimated that CHINESE ZODIAC might be his last action film - recognizing that even with all the assists of modern movie-making technology he is now pretty much an old man. It's not a bad note to bow out on.