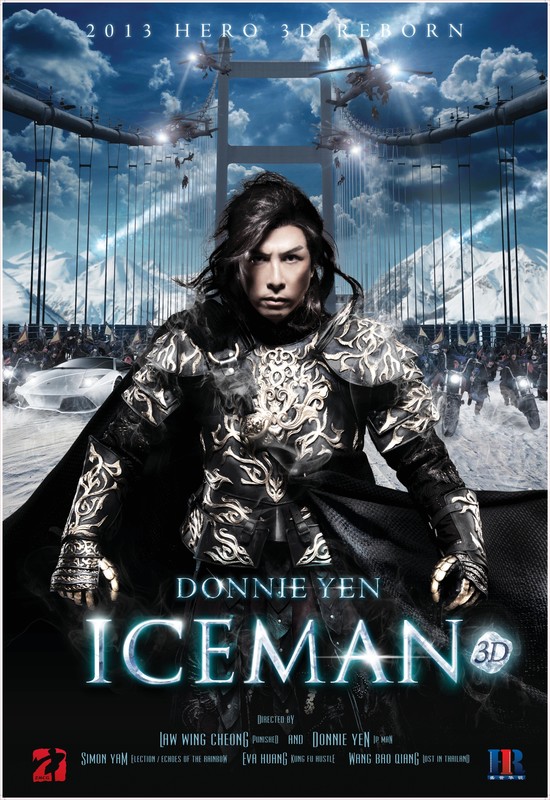 Imperial bodyguard He Ying (Donnie Yen) is accused of collaborating with Japanese pirates after returning from a trip to India, and is sentenced to death for himself and his whole family. Breaking his bonds he starts to flee, chased by two of his colleagues and somehow - this is never really explained - finds himself frozen alive, waking up 400 years later in the early 21st century, where his frozen/thawed colleagues continue to pursue him. He finds refuge with a young club hostess (Eva Huang) when she realises he possesses some valuable antiques, and sets out to seek the Golden Wheel, a mystical device which may have the power to return him to his own time so that he can save his family.

ICEMAN 3D is, obviously, a remake of the classic Iceman Cometh from 1989, with Donnie Yen stepping into Yuen Biao's shoes and at least two other people attempting to fill Yuen Wah's. The plot has been changed up a bit but is still basically recognisable, and the modern day times that our Icemen find themselves in are obviously a couple of decades more modern - which is actually a bit of a shame, because there is something quite hilarious now about Ming dynasty warriors being overwhelmed by 1980's technology.

In fact, one way in which the remake is mysteriously inferior to the original is that the whole "fish out of water" angle has been almost completely excised - apart from a scene where Donnie Yen is briefly baffled by tinned food and mistakes a toilet for a well, the time travellers adapt to the modern era almost without note. They are almost immediately comfortable in their surroundings and using modern technology, as if the 21st century is basically exactly what they expected life to be like. It's a pretty conspicuous omission in a film about ancient warriors being suddenly transplanted to modern times that the culture shock and confusion this must surely entail is only given a passing glance.

The other ways in which the remake is inferior to the original are... well, everything. ICEMAN COMETH was a bit uneven, as Clarence Fok films tended to be, but it was undeniably glorious the incredibly opulent art design and cinematography and the spectacular wire-enhanced acrobatics and combat were the kind of mind-blowing stuff that only Hong Kong had the nerve to produce in those days, and which made me a fan of Hong Kong cinema. The script wobbled in places but was basically tight, and had something to say about modern life. Where the script for the new film deviates from the original it is invariably to its detriment - the new film is less coherent and less entertaining.

The visuals in the remake are still good, and benefit from the more modern technology and probably higher budget that the film makers had access to, but they don't have that dreamy extravagance of the original, and there are a few places where lousy CGI or compositing are more conspicuous than the low budget effects of 1989 ever were.

The action scenes are also good, with Donnie Yen being his usual gifted self and primary opponent Wang Bao-Qiang also delivering some impressive acrobatics. Given that the original featured an extended toe-to-toe between Yuen Biao and Yuen Wah in their prime as its finale, though, it would be hard for any film to improve on the martial arts and acrobatics. ICEMAN 3D does hold its own though, with some cool acrobatics and a final fight scene on a bridge surrounded by crashing cars that is quite spectacular, even if much of the spectacle is down to CGI.

I say final fight scene, but that's not quite accurate, because this is only part one of the film, and although it has its own climax it is clearly not complete in its own right - the ending is very much a "To Be Continued...", which is annoying because I'm not sure I want to watch another 100 minutes of it!

Whilst not awful, there is no question that ICEMAN 3D is a worse film than ICEMAN COMETH. Did anybody really expect otherwise though? You have to wonder why people remake films that were already at least minor classics... unless the original has some blatant flaws that you can clearly improve on, chances are you're just going to suffer in comparison.

I suppose the idea might be that young audiences will be too freaked out by the dated technology and wardrobes to appreciate the original, so updating it to a more contemporary style might allow them to enjoy it... this is not a philosophy I subscribe to personally, but I have certainly noticed that mainstream audiences struggle to watch old films in the context in which they are made, so from a commercial perspective it probably makes sense. It's just a shame that in bringing the film up to date, they lost quite a lot of what made the original so charming.