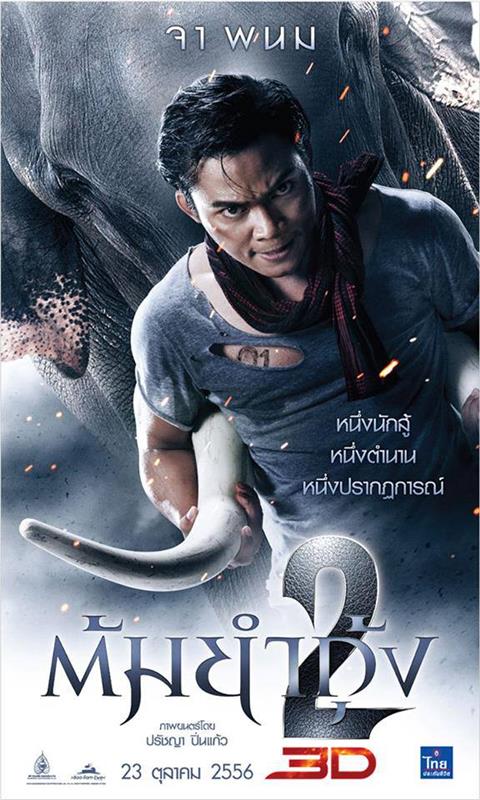 Simple village boy Kham's elephant Khon is stolen again, this time by villains who have been hired to derail the peace talks between the Eastern and Western factions of fictional nation Katana and have determined that both Kham and Khon have a role to play in their scheme. Police officer Mark (Petchtai Wongkamlao) is back in Thailand, having heard rumours of a plot to disrupt the talks, and is surprised to find himself crossing paths with Kham again.

Tom Yum Goong was a decent if somewhat stupid martial arts film that attempted to introduce Tony Jaa to a wider international audience by filming in a foreign location (Australia) and featuring a more international cast than Ong Bak, with some success. The plot could largely be forgiven for its juvenility, as it basically provided a framework for Jaa to get into a sequence of fights with opponents of ever increasing martial arts skill, and that escalated in spectacle.

TOM YUM GOONG 2 follows a similar formula, though it has a less obviously video-game inspired structure, and a less international flavour. There are quite a few foreigners in the cast, with RZA playing the main villain and American Marrese Crump as his henchman, No. 02, but there is still a more distinctly Thai feel to the film.

Director Prachya Pinkaew definitely knows how to structure an action film - delivering action early, often, and on an ever-increasing scale. Every action film director should study his work to see how to pace an action film properly. TOM YUM GOONG 2 doesn't waste time getting to the action, with the first large scene beginning about 20 minutes into the film and going on for most of 15 minutes - well past the point where it stopped making any sense! It is quite spectacular, featuring a rooftop fight/chase against a gang of thugs on motorbikes (who evidently haven't watched enough action films to know that motorbikes make terrible, terrible weapons - especially on a rooftop!) and proceeds to a crazy motorbike/car chase/fight scene.

It is all quite preposterous but spectacular, though it does show the film's surprising dependency on CGI and green screen work, unlike the team's earlier films. The reason for this might be that the film was shot in 3D, as most of that green screen compositing seems to be set up to allow Jaa or his opponents to come flying out of the screen at the viewer. I have yet to be convinced that 3D adds something worth having - possibly because I've never actually watched a film in 3D. TOM YUM GOONG 2 uses a lot of green screen work, which is not particularly well done and does detract from the film - but unlike some films, the compositing and CGI are not used as a substitute for actual human action, and the performers are still clearly doing their moves for real, even when the backdrop is not.

Once the extended fight/chase is over things cool off a bit, but there are still regular doses of action to keep the viewer awake - unlike THE RAID 2, for instance, Pinkaew does not feel the need to suspend the action for an hour in the middle to go over all the cliches he has learnt from a lifetime watching genre films. What we need to know about the characters can mostly be shown through action, so it is.

In a welcome move, Pinkaew's other major star, JeeJa Yanin is also cast in the film, though her role is decidedly secondary - she crops up at regular intervals and gets into fights with people (including Jaa), but her narrative arc is barely developed at all. She doesn't get too many fights all to herself either, usually being a player in part of a bigger brawl.

The film's biggest surprise is the American Marrese Crump, who shows himself to be a really remarkable fighter - he's as fast as Jaa and clearly more powerful, and evidently expert in a multitude of martial arts styles. His acting is even passable. Definitely somebody to watch out for - he has apparently been preparing himself for a break into films for quite some time, and if he's as dedicated to the idea as he appears to be then he certainly deserves to be given a shot. Tom Yum Goong 2 ought to serve well as a calling card to producers in Hollywood. He even gets a credit for the fight choreography.

Tony Jaa manages to somewhat redeem himself here, after his career-torpedoing meltdown when he tried to take on the director's role in Ong Bak 2 and 3. He steps back into a role he is clearly better suited to - simple village boy with stunning martial arts skills. Despite the CGI and compositing in the film it is clear that Jaa does still have the moves, though there is nothing quite as spectacular as the fight scenes in the original ONG BAK here.

Hopefully he will return to the industry doing what he does best, with his ambitions scaled down a bit by his humbling experiences. The recent death of his long-time mentor and choreographer Panna Rittikrai is bound to be a setback though.

TOM YUM GOONG 2 is not a great film, but then neither was TOM YUM GOONG - both are at least fun to watch and feature some imaginative action scenes executed by extremely talented performers, and which don't take themselves seriously enough to waste time on frivolous plot details. If I were to pick a film to introduce somebody to Tony Jaa and JeeJa Yanin it would still have to be ONG BAK and CHOCOLATE (I would change the DVD quickly so they didn't notice that it was actually two films), but TOM YUM GOONG 2 would go on the list of films of films to watch eventually if those went down well.