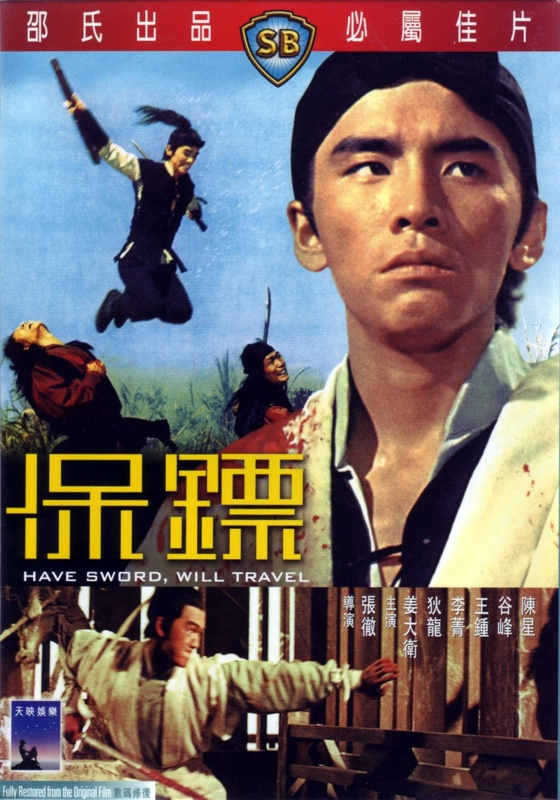 Every year Lord Yin's security company transport 200,000 pieces of freshly minted silver pieces to the capital, but this year he is in trouble because an illness has caused him to completely lose his kung fu - he can now barely hold his sword. He calls upon his nephew Siang and Siang's fiancé Piao Piao, both accomplished martial artists, to help with the job.

On their way to Lord Yin's place the couple encounter a young man named Lo Yi who claims to be penniless but exhibits exceptional kung fu. When Lo Yi arrives at Lord Yin's looking for a bed for the night, Siang suspects that he is a scout for the Flying Tiger clan, whose activities suggest they are planning to rob the caravan. He can't miss the dreamy looks Piao Piao keeps giving Lo Yi, which doesn't help engender trust.

HAVE SWORD, WILL TRAVEL is Chang Cheh in wuxia mode, the more romanticised form of martial arts cinema, as opposed to the kung fu films that Chang Cheh is mostly associated with - I tend to prefer the wuxia Chang Cheh.

There is something of the spirit of King Hu in the mystical martial arts powers the fighters demonstrate, though where it was usually left to women to save the day in King Hu's films, Chang Cheh assures us that they are nothing but trouble. Piao Piao's fickle affections drive a wedge between two heroes who would surely have been sworn brothers if they met in different circumstances. This is virtually feminist coming from Chang Cheh though, as he generally doesn't seem to think women are even worth mentioning.

The Maurice Binder-esque opening credits set the stage for the film beautifully, with characters introduced via slow motion tableaux set on brightly coloured sound stages, culminating in a big, bloody brawl over which the director's name is splashed as the music crescendos. It functions as an overture, telling us in the abstract what we can expect from the film.

From there the film fades to one of those luscious indoor-outdoors sets that are such a defining feature of Shaw Brothers films, where we are introduced to an impossibly handsome Ti Lung and his beautiful fiancé Li Ching. An encounter with a gang of thugs leaves us in no doubt as to why she is smitten. We are then introduced to the film's other couple, David Chiang and his horse - and it is a good horse.

I'm normally 100% on Team Ti Lung, as David Chiang has a smug grin that usually irritates me, but I have to admit that this film belongs to Chiang - he's charming, dashing and a more sympathetic character than Ti Lung. It's no wonder Piao Piao (yes it sounds like Pew! Pew!) is tempted to stray. The love triangle thus formed is at the heart of the film, with each character facing conflicting emotions and motivations that propel them towards inevitable conflict.

Another inevitable conflict is approaching at the same time of course - we know the Flying Tiger clan are going to attack the convoy, and we can probably predict that the two conflicts will end up being fought on the same battlefield, creating a situation of maximum peril. It's to Chang's credit that we aren't sure what the end result will be until it happens though.

The climactic battle reminds us that this is a Chang Cheh film after all, with men dying bloody deaths in the combat staged by Tang Chia and Yuen Cheung-Yan, culminating in a tense and protracted fight through the floors of a pagoda that must have influenced Bruce Lee's original vision for Game Of Death. Scenes of mass carnage of henchmen and tense duels between skilled fighters create a flow to the action that helps to maintain the thrill for a full thirty minutes.

Films like this and Trail Of The Broken Blade are Chang Cheh at his best, for me, beautiful melodramas full of passion and excitement and sumptuous cinematography (though there was a clear need of a steadicam in a few shots). The star power of David Chiang and Ti Lung is undeniable, and it's no wonder Chang Cheh cast them in the lead roles of his films again and again after this.

Definitely one of the better films of the genre and era, and probably a good place to start if you want to explore the films that influenced Crouching Tiger, Hidden Dragon.