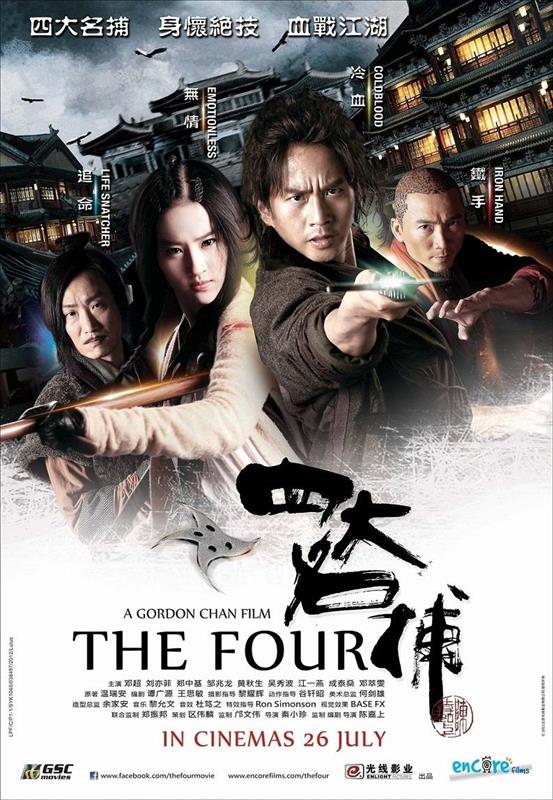 Four martial artists with unique and distinctive skills come together under the leadership of master Zhuge Zhengwo (Anthony Wong) to form the Divine Constabulary, operating as a sort of secret service under the aegis of the Emperor. An investigation into counterfeit currency brings their existence to the attention of Department Six, the regular constabulary, which causes them some concern about territorial issues. However, a much greater threat has managed to infiltrate itself into the department, under the direction of an ambitious villain.

THE FOUR is one of those wu xia films where it is quite difficult to produce a plot summary because there is such a lot going on. It is based on a series of novels by Malaysian author Woon Swee Oan, who I'd never heard of, but apparently adds some back story and details which are fresh from Gordon Chan's own imagination. The film doesn't waste too much time introducing the characters, and it is a little bit confusing at first trying to keep track of who is who and how they all relate to each other, but it mostly comes together eventually. I think.

The plot is reasonably satisfying but is probably not the main draw of the film, which is a lavish, quite epic production packed full of astonishing set design and extravagant action sequences. The action is firmly in fantasy wu xia territory, with wirework and CGI being used extremely liberally. Some people will hate it because of that, but if you enjoy films like Stormriders then THE FOUR is an extremely well executed example of it, showing how much the technology has developed, and just how impressive a spectacle can be generated these days. The wirework is especially impressive in the film, with some very elaborate and sophisticated sequences.

The cast generally do a decent job with their characters, though Wu Xiu-Bo tends to steal his scenes as a rather charming villain. Anthony Wong is in "elder statesman" mode, restrained and respectable - no Ebola Syndrome sleaze on display here. Deng Chao has the most to work with out of the other major characters, and gives a good account of himself.

I am predisposed to enjoy this sort of film, being generally a fan of over the top fantasy action, but I think THE FOUR is reasonably rounded as a film even when people aren't flying through the air (which, to be fair, is not often). I think it's vastly superior to the recent X-Men film I saw (X-MEN FIRST CLASS), and it's a shame it won't get the same level of distribution (I wait for Film 4 to prove me wrong).