Directed by
Genre
The redemption of Uwe Boll 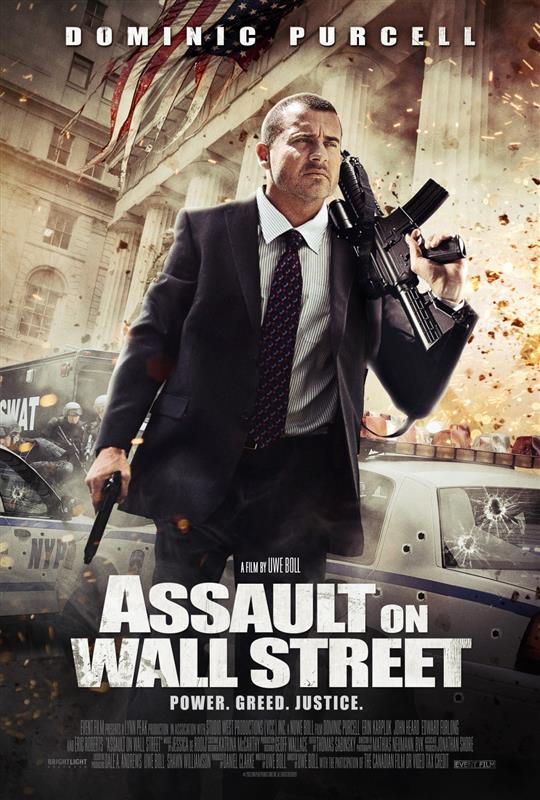 2008, US veteran Jim Baxford (Dominic Purcell) is working an honest job as a security guard in New York. Life is tough because his wife has cancer, but she is being successfully treated and is on course to recover, and he is working hard to support them both until she does. Things get a little bit tougher when Jim's health insurance company tell him that he has reached his "coverage cap", a limit buried in the small print, and he has to cash in his investments to pay for continuing treatment.

And that's where the real problems start... when he tries to call his broker about selling his portfolio he gets the run around, eventually discovering when he manages to speak to him that the brokerage had put his money in some dodgy property portfolios which have basically evaporated, and not only are his savings gone but he somehow has liabilities of $60,000 he needs to cover. Next up his bank calls when he is unable to make a mortgage payment after the interest rate on it shoots up, and when they realise his wife is not working due to her illness they decide they have to foreclose on his home to recoup their money.

That's not even the end of Jim's problems, but I won't recount the entire plot. Suffice to say that Jim is left thoroughly in the shit due to the shameless greed and fraud in the financial industry, and he is pretty pissed off about it. There are no bailouts from the government for an honest soldier.

Uwe Boll is one of the most reviled directors in Hollywood history, for the very good reason that he has produced a lot of incredibly bad films, mostly based on video game licences. I have only seen a couple of them, but they were so bad that I initially assumed they were parody... but not even good parody. Incredibly, it turned out that Uwe Boll did seem to genuinely believe himself to be making worthwhile films, and famously challenged his critics to fight him in the ring if they disagreed (never entirely clear what that would have proved, had anyone taken him up on it!).

ASSAULT ON WALL STREET can perhaps be viewed as the start of Uwe Boll's redemption... a film which somebody needed to make (and nobody else seemed likely to do so). It was almost unnecessary that it be a good film, but to my surprise it actually kind of is! I hardly cringed at all when watching it! Maybe it's a case of low expectations, but for the most part the film seemed at least competent - it is of course completely devoid of subtlety, but in this case that is probably what was needed.

The first two thirds of the film document Jim's decline in fortune, making sure to let us know that he himself, his wife and his friends are all decent, honest, caring people who have done absolutely nothing to deserve their problems. As this unfolds the film frequently features clips from news media on screens in the background, mostly genuine news footage from the 2008 era which documents the financial collapse and reminds us that not only did these things really happen, not only did everybody know that it was the result of rampant fraud and theft on the part of major Wall Street firms, but that nobody was ever really held accountable... in fact as the public was shafted via taxpayer bailouts, most of the firms and individuals whose greed created the problem found a way to profit even further.

And that is why the film had to be made... lest we forget what happened. Already in 2014 the rage that was felt 5 years ago towards the banks and brokerages who profited handsomely from their misbehaviour seems to have been effectively diverted... fear of terrorism, immigrants and poor people on benefits seems to have consumed much of the anger that was previously being righfully directed at those who had caused and continued to exploit global financial collapse. One has to assume that this was at least in part deliberate... demonising the powerless to divert attention from the misdeeds of the powerful is a strategy that has been used again and again in history. Divide and conquer - make us fear each other so much we turn to the powerful to protect us, and turn a blind eye to their own rapacious behaviour so long as we can pretend it's making us more secure.

So, Uwe Boll should be lauded for making this film, a film which reminds us without ambiguity that ordinary, honest people were robbed on an unprecedented scale, and nobody has been punished for it. Admittedly Boll's proposed solution is a bit, err... unsubtle, but it at least it reminds us that our rage has never been assuaged, only appropriated and misdirected (much like the public purse).

I propose that in exchange for making ASSAULT ON WALL STREET Uwe Boll should be officially forgiven for one of his video game inspired atrocities... pick a film (I nominate FAR CRY) and we will agree to erase it from our memories, pretend it never existed. Pretending it was good is a bit too much of an ask, so lets just forget about it... after all, we seem to be capable of forgetting far bigger crimes than making a lousy movie.