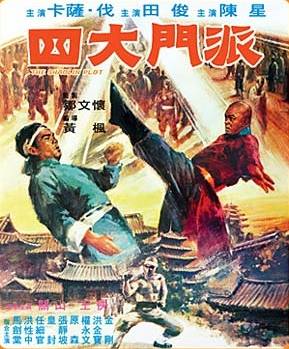 Evil Manchurian Prince Dagulun is driven by an obsession with acquiring the kung fu manuals of all the top martial arts schools in China, and through violence and bullying he has managed to acquire most of them. The manuals he most desires remain unobtained, though - those of the Shaolin Temple. He hatches a plot by which to acquire them.

Meanwhile, Little Tiger - the earnest son of the head of Wudang School - receives shelter and training from a former Shaolin Monk after his father is murdered by Dagulun's men. When he gets wind of Dagulun's plot, he must convince the Shaolin Abbot of the threat, and of his own trustworthiness.

THE SHAOLIN PLOT remains quite obscure, despite clearly being one of Golden Harvest's bigger productions of the era. It didn't receive a DVD release in Hong Kong until 2010, and the only other version I've seen was a mainland disc of dubious quality, so I don't suppose it has been very widely seen. It's a shame because it is a generally high quality production, with gorgeous use of the Korean locations where it was filmed (the temple that doubles for Shaolin may be the same one used by King Hu in Raining In The Mountain - it looks quite similar) and a great cast.

The film is interesting as a threshold film, probably the last film Sammo Hung worked on as action director (and cast member) before becoming a director in his own right, with lots of the fighters he would soon be casting in much bigger roles (such as Yuen Biao and Yuen Wah) appearing in tiny bit parts. Stylistically the film still feels "old school", but the fight scenes are edging towards the faster, more fluid choreography that Sammo would develop fully in his own films.

James Tien is good as Little Tiger, the closest thing to a lead in a fairly ensemble film. I do quite admire James Tien, because despite being thrust into the limelight early in his career due to his appearances alongside Bruce Lee he still continued to develop his skills as an actor and a martial artist, and was notably better in both respects by this stage in his career. That said, the character would probably have been better served by a younger, spunkier actor. It would have been a great film for Jackie Chan, if he wasn't being misused by Lo Wei at the time. It does seem a shame to have Yuen Biao on set but relegated to an extra, but I suppose the studio needed a "name" to anchor a relatively big production.

There is quite a lot of the film where Little Tiger is nowhere to be seen, with various other characters being given the spotlight. One of the most substantive roles belongs to the chief villain Prince Dagulun, played by Chen Sing, who has his own agenda and arc beyond the typical "come back when you have the skills to defeat me {maniacal laughter}" villains of the day. Sammo Hung's evil Tibetan monk is far less developed as a character, but does have by far the coolest beard to make up for it.

It's a shame that more development wasn't given to the Korean fighters Casanova Wong and Kwan Young-Moon, since they play a major role in the final fight - it would have been nice to know a bit more about them other than that they are kick-ass monks.

The final fight is undoubtedly the highlight of the film, as the villains get their comeuppance at the hands of Little Tiger and a cadre of Shaolin Monks. The whole scene is fast, fluid, inventively choreographed and expertly perfomed. Casanova Wong pretty much steals the show with some fantastic leg work - truly one of cinema's best kickers (not, sadly, a category in the Oscars).

THE SHAOLIN PLOT is firmly in the "old school kung fu" category, and is unlikely to have much appeal outside fans of that genre, but to those fans it is definitely one of the must-see films of the era, and deserves to be more widely acknowledged than it has been in the past.