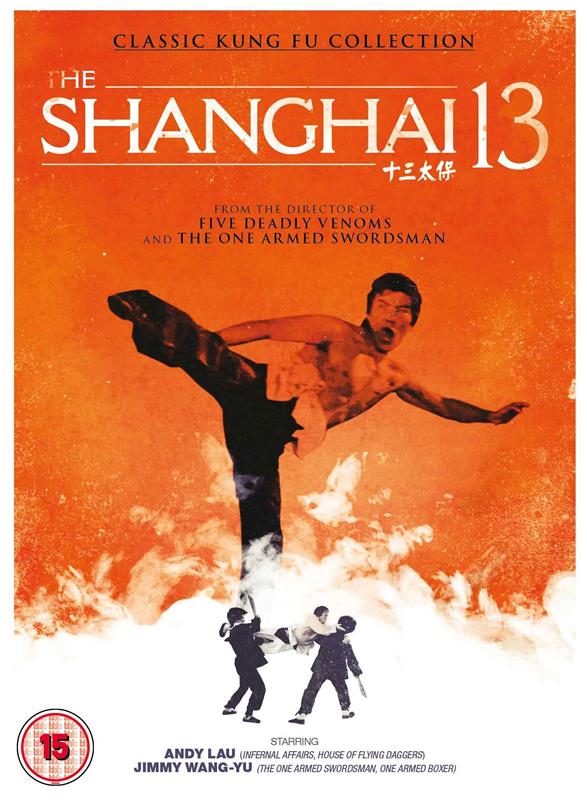 Chinese patriot Mr. Ko steals a document exposing a traitorous deal between the authorities in Nanking and the Japanese, then appeals to Shanghai big boss Brother Tai to help him get the documents safely on a boat to Hong Kong so that the treachery can be exposed to the people. Shanghai is home to thirteen notorious martial artists, The Shanghai Thirteen, but it is uncertain which of them will assist the patriotic hero and which will try to stop him.

THE SHANGHAI THIRTEEN is one of very few films which director Chang Cheh made after parting company with Shaw Brothers, having directed about 90 films for them over the course of seventeen years. It was produced by the then new company Winner's Workshop, and as such can probably be classed as an Indie Film. I assume that the budget was miniscule, and that the director called in favours from all the people he had given a helping hand to when they started in the industry to come and work on this film. As such it boasts a rare cast, featuring stars old and new, and a fine set of action directors.

By this point in his career, Chang Cheh had stripped down his approach to film-making to an almost abstract level, abandoning such frivolous extravagances as shooting on location, having female characters and even having any plot or character development if it could be helped. SHANGHAI 13 epitomises this almost post-modern approach to martial arts cinema, being little more than a premise and a string of manly men fighting and dying, like men. Character development is non-existent, with each character being more or less defined by the nickname by which they are known. Mr. Ko is a patriot with some documents, and that is about all we ever learn about him. The other characters are men of the jiang hu, each with their own distinctive fighting style and either patriotic heroism or larcenous villainy, as the case may be. None is afraid to lose their life in battle, if that is what their honour demands.

1984 was surely too soon to be creating a nostalgic throwback to the 1970's, but with its funky soundtrack and straight-laced macho characters it feels like that is what Chang Cheh was trying to do. Possibly he just refused to accept that times had moved on, that audiences were now much more interested in the kung fu comedies of Jackie Chan and Sammo Hung or the extravagant fantasy wu xia of Tsui Hark and Ching Siu-Tung. Shaw Brothers had recognised that the times had changed and got out of the film business, but Chang Cheh seems to have been clinging on to the bitter end.

The cast is what makes the film, of course, with several of Chang Cheh's favourite leading men playing one or another of the thirteen rascals, though the casting of hot new pretty boy Andy Lau is jarring in this context (it is amusing to recall that there was a brief period when he was being pitched as a rising martial arts star). The rest of the cast is something of a who's who of Chang Cheh films though - a shame Fu Sheng had popped his clogs too soon to participate, or it would have been a great recap of the various phases of Chang Cheh's career.

The action choreography looks a little dated compared to the more fluid, realistic styles being developed by Jackie Chan and Sammo Hung - it is very much in the style of the Venoms films, with plenty of time for Chang Cheh's red paint drenched death grimaces. Action is plentiful, which is lucky given the lack of plot or character development, and there are plenty of opportunities for various familiar faces to face off in deadly combat.

Overall this is a film that works best as nostalgia, a chance for fans of Chang Cheh's manly martial arts films to smile appreciatively at the familiarity of it all. It is devoid of the weirdness of some of the director's later Shaw Brothers films such as The Weird Man, or even Crippled Avengers, though it would sit relatively comfortably on a double bill with the latter. I suspect that Chang Cheh intended it as a sort of cap on his career, a fond farewell. He must have been absolutely sick of making films by this point!

It's certainly not a film I would show to somebody who was not familiar with the director and the cast, as I think it would be very difficult to explain its charms.

There was an old DVD of the film from Hong Kong (or possibly Taiwan) but the quality was so bad I couldn't be bothered watching it. Terracotta Films have, somewhat unexpectedly, released a new DVD in 2015 which features the film in full widescreen in Cantonese (probably the original language, though Chang Cheh usually preferred Mandarin) and removable English subtitles, which makes it far more watchable. The print is a little bit noisy but otherwise looks good, and the subtitles contain some occasional (and inexplicable) spelling mistakes, but are adequate to the task of conveying the paper-thin plot. I believe there is an English dub track on there too... I would normally rail against dubbing because it makes all the dialogue sound retarded, and the actors look wooden and awful... but in a film like this I guess it wouldn't make much difference :p