Directed by
Genre
Fun romp in the Flying Guillotine style 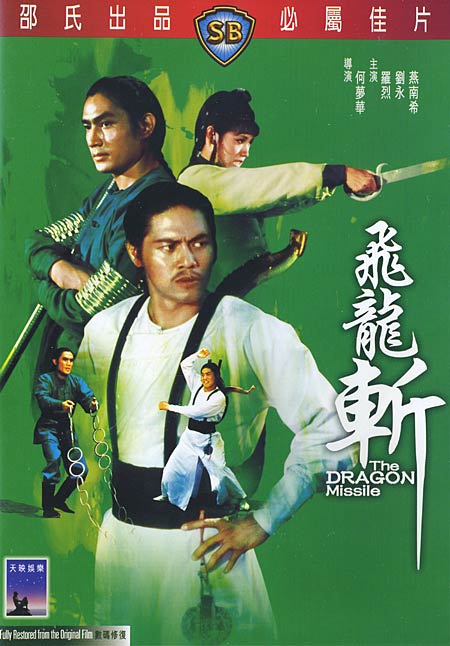 Lord Qin Quan is suffering from a highly poisonous boil, which is guaranteed to be fatal in 7 days if he is not treated with the 1000 year longevity rattan, which can only be obtained from one particular herbalist who lives 4 days ride away. Qin Quan gives his loyal retainer Sima Jun the task of acquiring the rattan, and promises him untold riches and power if he is successful. Sensing an opportunity for personal enrichment, the Lord's advisor hires a group of mercenaries to travel with Sima, instructing them to steal the rattan once it has been obtained and deliver it to him instead.

THE DRAGON MISSILE is very clearly an attempt to cash in on the success of The Flying Guillotine, kitting Lo Lieh out with the eponymous weapon which is essentially a razor sharp boomerang carved with a dragon, and which manages even more implausible feats of aerial navigation than the famous guillotines, but usually with the same decapitatory effect. Luckily, the film is also awesome and can therefore be forgiven for being a bit derivative and fantastical.

The chief strength of the film is a fine script from Ni Kuang, a rich intrigue of double crossings, betrayals and conspiracies. The characters are also very memorable, each with distinctive appearances, attitudes, weapons and techniques. Choreographers Tang Chia and Yuen Cheung-Yan stage some great fights, with the missiles in particular wreaking impressive carnage.

This was the first new Shaw Brothers film I'd seen in years, and it was great to find that it could still be as entertaining an experience as I remembered. I'm not sure why it passed me by (or vice versa) on release, it must have been very late in Celestial/IVL's schedules. There doesn't seem to be any particular reason why it should be so, as it stands up perfectly well with other Shaw Brothers films of the day.

Ho Meng-Hua has never been one of my favourite directors, but he can generally be relied on to turn in a solid film. THE DRAGON MISSILE does not exactly exude style or innovation, but it's a respectable piece of entertainment and generally good fun. Flying Guillotine fans in particular won't want to miss it.