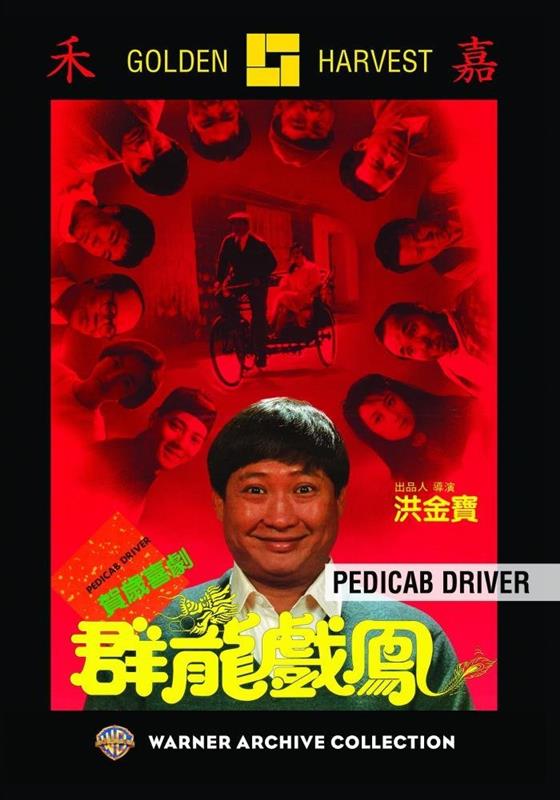 Lo Tung is a Macau pedicab driver, leading a simple life - trying to make ends meet, hanging out with his fellow drivers and hoping for romance to blossom with Nina Li. Life gets complicated when his friend Pretty Boy (Max Mok) meets and falls in love with a young woman after colliding with her in the street. Although the two are clearly a perfect couple, the career her family debts have driven her into sets the scene for conflict with the local gang boss (John Shum).

PEDICAB DRIVER is a fan favourite whose reputation has probably only been enhanced by its unavailability - there was a UK VHS tape in the 90's, but no official DVD was released because Warner Bros. famously bought up the rights and then sat on them. For 20 years. Pretty much everybody had given up hope of them ever seeing the light of day, until Warner Bros unexpectedly announced in 2015 that four films from the archives were going to be released - including PEDICAB DRIVER and Blade Of Fury! The discs are apparently "manufactured on demand" - presumably a system that lets studios take a risk on films where they're not expecting to do much volume.

It's great to finally see the film in a pretty impressive remastered print, with crisp, sharp colours and a thankfully unmolested mono audio track. Because Hong Kong film fans are cursed never to have the perfect version of anything, there had to be something wrong of course - in this case the subtitles, which are in fact captions. Grrr. Even if I was deaf as a post, I really don't think that being notified that "instrumental music" was playing would improve my enjoyment of a scene... let alone that some seconds later "music continues". The fact that somebody crashing through a sheet of plate glass is accompanied by the sound of glass breaking can probably be taken as read without, you know, actually having to read it.

Anyway, in the modern era these problems are easily remedied with a PC - and having the film look and sound so good after all these years is worth putting up with some minor idiocy.

It had been many years since I saw the film, and am pleased to say it still stands up well. It has that unique fusion of action, comedy and melodrama that Hong Kong made its own in the 1980's, and of course the fantastic fight choreography of Sammo Hung in his prime. The fight between Sammo and Lau Kar-Leung is legendary, if only because it is the only time that the two greatest choreographers and directors in martial arts cinema's history ever shared the screen.

Kudos to Warners for finally releasing the film, even if they did wait until DVD is almost dead as a medium to do so!