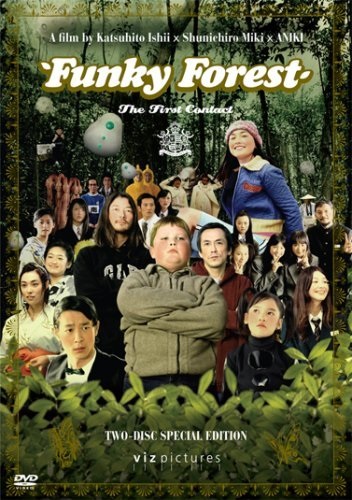 NAISU NO MORI - FIRST CONTACT may well be the strangest film I've ever seen... a 2.5 hour head-scratcher combining the efforts of three director/writers into a whole with no discernable plot! the film is essentially a number of short stories or vignettes, mixed together and occasionally crossing over (Tadanobu Asano and Susumu Terajima appear in a large number of the scenes). The content of these pieces is extremely varied, and beyond unpredictable. There's bits of stand-up comedy, animation, music, dance and other moments that are entirely inexplicable. We spend quite a bit of time inside character's daydreams, and we make first contact with some very odd little aliens. The film even has its own commercials and (thankfully) a 3 minute intermission.

This is undoubtedly an avante-garde film, I don't know if calling it "arthouse' is appropriate because it's so silly and funny (not like the kind of austere beard-strokers that one usually calls "arthouse"). There is some truly mad stuff going on, but there doesn't appear to be any deeper meaning or message to any of it... in fact I'm not sure what the "purpose" of the film is at all, except for the film-makers to go nuts.

At 150 minutes it must be admitted that the film outstays its welcome a little... sitting in a theatre for that long it's nice to have *some* sort of narrative to get carried away on (it's enough time to spin quite an epic). NAISU NO MORI feels almost like it should be an ambient film - on at a club or something. Either that or they should have handed out LSD at the entrance :P

I can't think of any more eclectic film in cinematic history. Think Survive Style 5+ meets Kitano's GETTING ANY meets NAKED LUNCH meets Alejandro Jodorowsky meets Aphex Twin, and you're getting somewhere near where the film is at!