Directed by
Genre
Silly but fun 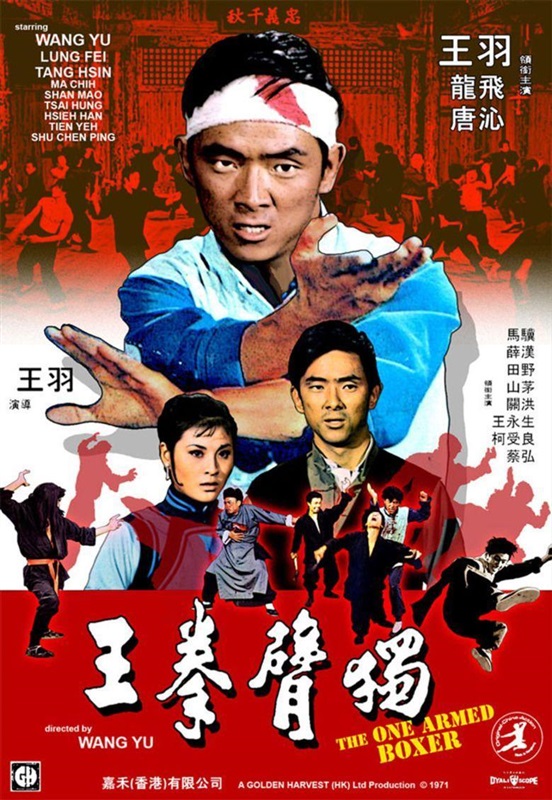 To lose one arm may be regarded as a misfortune, to lose both begins to look like carelessness - Oscar Wilde

Jimmy Wang Yu is the star pupil of Ching Te martial arts school. When he sees men from the Hook Gang harassing customers in the tea shop he intervenes, sending them scurrying with their tails between their legs. On hearing a slightly modified version of this, the Hook Gang chief goes to Ching Te to demand retribution, but is sent packing by the sifu. Vowing revenge, he summons the best fighters from a number of nearby countries and sends them to wreak havoc. Our Jimmy is one of the few to survive, and even he loses an arm. A passing doctor saves him, and teaches him the Crippled Fist technique, training his remaining arm to be invincible.

Jimmy Wang Yu may have lost an arm a statistically unlikely number of times in his career, but I don't believe he ever lost both in the same film so I guess we can chalk it up to misfortune rather than carelessness. It rarely seemed to stop him, indeed his delimbing in One-Armed Swordsman launched him to local superstardom.

Having parted ways with Shaw Brothers somewhat acrimoniously, Jimmy decamped to Taiwan to make martial arts films in his own way, with the patronage of Golden Harvest. ONE-ARMED BOXER combines traits of his two most successful roles (Chinese Boxer being the other one) and some dubious racial stereotypes into a film that has virtually non-stop fights from start to finish. Jimmy's recovery and recuperation is hilariously distilled to about 30 seconds of still images.

The different schools and techniques represented don't seem all that different really, apart from the travesty of a Wai Kru performed by the "Thai" boxers before they fight, and... whatever that's supposed to be that the "Indian" Yoga Master does. The Japanese fighters are of course especially ruthless, but for the most part everybody with two arms fights more or less the same.

It's by no means sophisticated, definitely not classy, and doesn't have the slightest depth, but it's hard to deny that the film is an entertaining watch. It's probably the sort of film that's at its best when watched in a group with a couple of beers though.