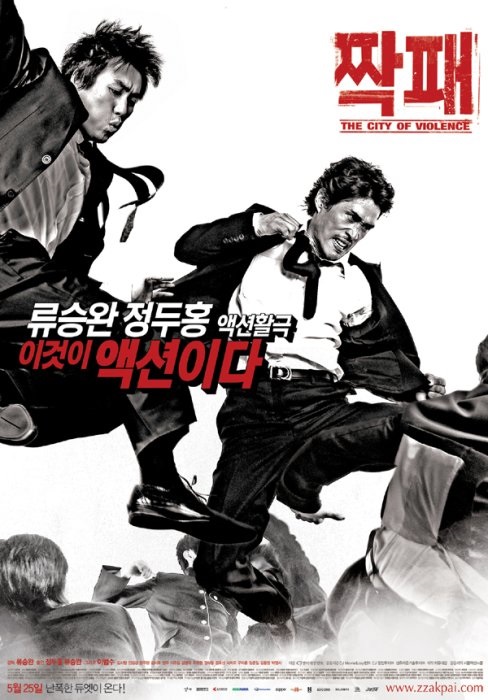 A Seoul cop returns to his hometown for the funeral of his childhood friend Wang-jae. He learns that the town is now being run by gangsters, with the biggest one of all being his old friend Pil-ho. Finding Wang-jae's death suspicious, he teams up with another friend from his youth to investigate.

THE CITY OF VIOLENCE was Ryu Seung-Wan and Jung Doo-Hong's follow up to the excellent Arahan, a film which raised the bar for Korean martial arts films. With the director and action choreographer also taking the lead roles it promised to be an action spectacle that really threw down the gauntlet for South Korean action cinema.

The film's story is a bit perfunctory, with few real twists or dramatic developments to offer. The cinematography is generally good, with some striking angles and compositions. The action starts off promising, with a battle in the streets against some break dancing thugs that escalates nicely, a tasty appetizer that promises good things to come... but then it peters out, with little else to show until the finale. It ends with a 20 minute brawl that features some individually great shots but is often edited into incoherence, suffering from close up shaky camera work with the camera often moving randomly instead of tracking the action, robbing it of flow and impact. All sense of when and where things are happening is frequently lost.

Ryu Seung-Wan and Jung Doo-Hong know better than this, and are certainly capable of better - the fights in ARAHAN show an exemplary understanding of spatial and temporal flow, and are edited to showcase the action rather than disrupt it. I don't know what went wrong here - apparently it had a smaller budget, but it's still not exactly a low budget film - and there are plenty of low budget films with more coherent action than this.

After ARAHAN I thought Ryu Seung-Wan and Jung Doo-Hong were going to be the next big thing in action films and I was really excited for this when it came out - and came away disappointed. I thought that watching it again 15 years later with lowered expectations I would appreciate it more... but it still managed to disappoint me.