Directed by
Genre
My kind of party 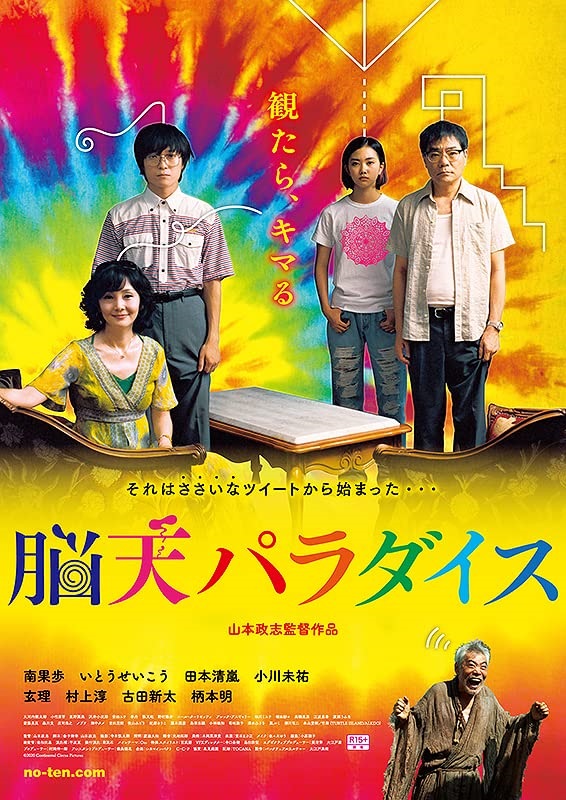 The Sasaya family have to sell their house in the Tokyo suburbs due to the father's debts and the mother absconding with a younger man. Angry with her dad and life in general, daughter Akane sends out a tweet on moving day saying "Party here, all welcome" and a map. She gets more responses than she bargained for.

WONDERFUL PARADISE starts off innocuously enough with the dysfunctional family mostly fighting and sulking, but then the first guests arrive, a boy turns into a stick, and things start to get... weird. The party grows to incorporate a wedding, a funeral, a birth, at least one death, a Bollywood style dance number, ghosts, a presumably alien coffee bean with murderous intent, some steamy sex and lots and lots of drugs... I'm guessing in the writers room as much as on screen.

I haven't come across director Masashi Yamamoto before, but apparently he's been making films semi-regularly for 40 years. That's particularly surprising as WONDERFUL PARADISE feels like a first film in many ways, the sort of thing somebody young who is brimming with enthusiasm but lacking in experience might produce.

The film's departures from logic and reason in favour of following whatever fun ideas came up reminds me of Nobuhiko Obayashi's cult classic (and first film) HAUSU, but unfortunately the creative ideas aren't accompanied by similarly creative visual experimentation or stylisation. It's filmed competently but quite conservatively, apart from the dance scene perhaps, which makes the more fantastical events on screen seem harder to swallow. A more exaggerated visual style and more risk taking with the camera work would have helped the film's more surreal and outrageous moments to fit in.

The film also suffers from some questionable acting, which probably stems from a director unable to give the less experienced cast members strong guidance. It's not terminally bad, but it sometimes lifted me out of the film's world a bit. The film has enough charm and invention to overcome its technical limitations, but it would have been nice if it delivered both.

Apparently Masashi Yamamoto is a firmly independent director and an "industry outsider", which is perhaps why even after 40 years he still seems a little amateurish. That's probably what allows him to be able to make films like this at all though, and cinema would be poorer without these kind of outré experiences.