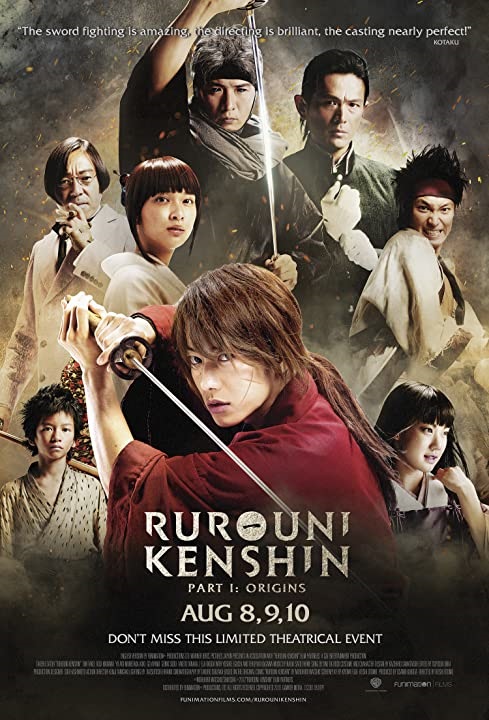 When civil war ends in Japan, starting the Meiji era, a legendary assassin known as Hitokiri Battousai vows never to kill again and becomes a rurouni, wandering the country and trying to do good, under the name Kenshin. One day he rescues a young woman from a killer who is using the name Battousai, hoping to draw the original into the open so that he can challenge him.

RUROUNI KENSHIN is based on a famous manga and anime that I've never seen, so I can't comment on how faithful it is. The general consensus seems to be that it is one of the most respectful and successful manga adaptations to date though. It's certainly slick, with some of the highest production values I've ever seen in a Japanese film, terrific art direction and remarkably crisp cinematography.

The film is reminiscent in some ways of Once Upon A Time In China, being set in a similar period in history for Japan where tradition was giving way to modernity and chivalry was no longer such a valued and rewarded attribute. It has some similar characters and plot beats, and something of the same aesthetic. I won't assert that it was a direct inspiration, but they were certainly at least drawing from the same well.

Takeru Satoh gives a star-making performance as Kenshin, dashing and charming and gamely doing most if not all of the action himself. The action is something to behold, featuring one of the freshest takes on martial arts choreography in a long time. The choreography is fast, fluid and above all kinetic. You can tell that Kenji Tanigaki cut his teeth working in Hong Kong, frequently with Donnie Yen, but the style he and Keishi Ohtomo developed here feels like something new - though presumably it was at least influenced by the anime and manga.

I'm assuming the character designs replicate the manga quite faithfully as they certainly have that feel, with the characters we most need to recognise having distinctive and exaggerated appearances - Munetaka Aoki's boxer wielding a gigantic "horse cutting" sword especially feels like he just leapt off the page.

The slickness extends to the handling of the story, which hits the right notes and rhythm for a summer blockbuster experience (I bet it was great to see it on the big screen). It's not an especially complex story but the themes of seeking redemption and being left behind by a changing society mean it's not exactly shallow either. The film didn't win many awards but it was a hit at the box office.

A pair of sequels came out a couple of years later and were similarly slick, if not quite as satisfying on a narrative level, and a new duology has unexpectedly been announced for 2021 - I am very interested to see how that turns out!