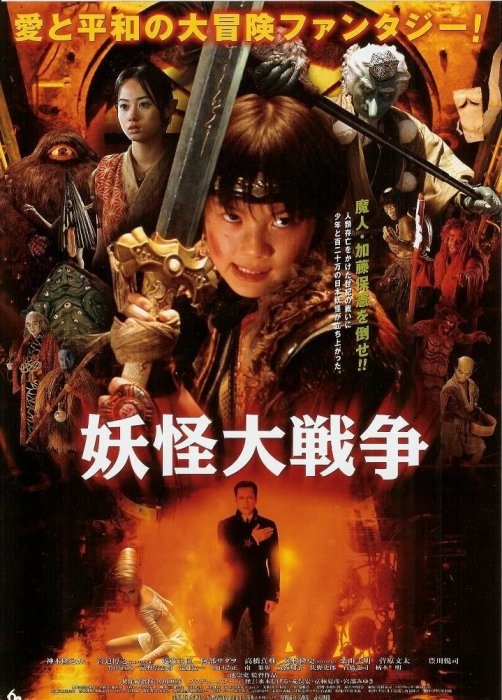 A young boy is chosen by fate to save the world from monsters and horrors of which they remain largely unaware.

The film is evidently bigger budget than anything else Miike has done, with lots of CGI to create fantasy world populated by odd creatures (the YOKAI). Perhaps the lack of extreme content is a consequence of more nervous investors, but I think it's probably just that he wanted to do something different. He's really never been a one-trick pony, but often gets accused of it - perhaps YOKAI is designed to silence those critics. Regardless, it's a great project for Miike to channel his boundless imagination and invention into.

There's a very cartoonish feel to the production, evoking thoughts of Miyazaki in places. The Yokai are based on an old series of comics that were in turned based on Japanese folk tales, which certainly influenced Miyazaki as well (particularly Spirited Away).

It must be remembered that Miike has nothing like the budget of a Harry Potter film to work with, so the special effects aren't going to be seamless Hollywood style work - some blue-screening is especially obvious. Some of the special effects are great though, with some very well animated creatures (a mix of CG, stop-motion and puppetry). I think the little sock-puppet that follows the hero around for much of the film was *meant* to look really cheap, and is all the cuter for it :)

The young lad who plays the hero of the film does a really good job - it's so hard to find a pre-teen who actually understands the concept of acting, but 9 year old Ryunosuke Kamiki is a genuine talent (I see he did voices in the last 2 Miyazaki films!). Chiaki Kuriyama is delicious as the villainess of the piece, though Mai Takahashi made an even greater impression as the pixie-eared River Princess - yum yum!

Those looking for another violent, perverted gangster film aren't going to find what they're looking for in YOKAI, but if you're a fan of Miike because of his imagination and wit, there's plenty to satisfy here. And it has the added bonus that you can happily put it on whatever company you've got :)