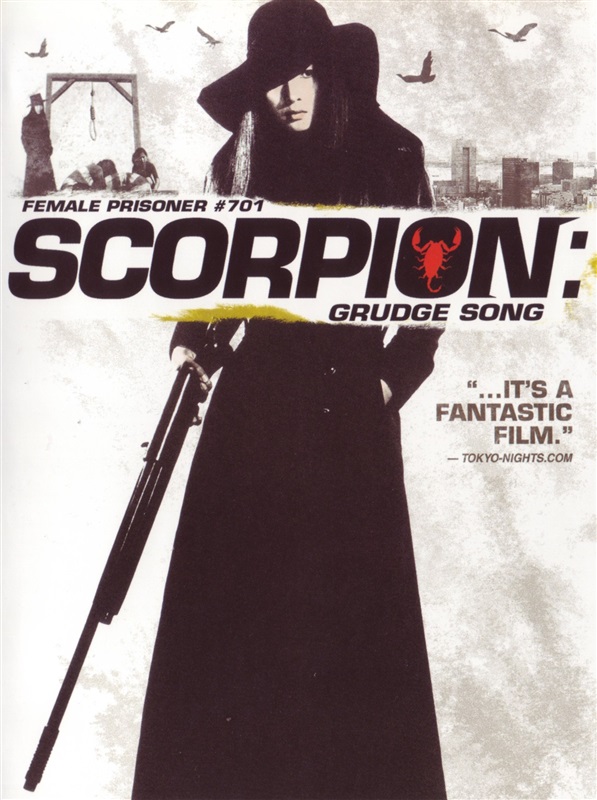 Meiko Kaji's fourth and final outing as Nami Matsushima sees Yasuharu Hasebe take over as director, bringing a different tone and direction to the film. Hasebe had previously directed Kaji in the Stray Cat Rock series of films, which presumably aren't as highly regarded as the Sasori films for a good reason.

The film begins with the cops tracking Nami down at a wedding (it's not obvious what she was doing there). They apprehend her but on the way back to the station she escapes, leaving a couple of dead cops in her wake. She seeks refuge in the bathroom of a Shinjuku club that operates live sex shows, where the lighting engineer finds her and offers her sanctuary.

The man has his own grudge against the cops from his days as a student activist, and meeting Nami awakens his latent desire to bring down the system so he urges her to join him. Has she finally found an ally, a man she can trust?

Even though Nami's self-reliance is one of the defining features of her character I found this to be an interesting development, the glimpse of a different way of life where she doesn't have to be alone is clearly intriguing to her... but trust does not come easy.

Kudo is introduced as being somehow "unmanned" by his treatment by the police in his youth, and initially it seems that not being governed by his dick might be why he can be an ally to Sasori. It's not long before they enter into a carnal relationship though, so it's not entirely clear what that was supposed to be about in the end.

The couple's time together is short lived, and around the midpoint things go south and Nami ends up back in prison, this time one with a female warden and guards - and an appointment with the gallows set for her not too distant future. For me the film derails at this point, with too much focus on the cop that arrested her and the prison staff whilst Nami is largely a passive presence.

Will Sasori finally get her comeuppance at the end of a rope, or will she somehow turn the tables on her captors once again? That's for me to know and you to find out, but since it was the last time Meiko Kaji would play the character you could argue that it doesn't make much difference.

Hasebe's direction is more formal and narrative focused than Shunya Ito's, and though the film still features some stylish cinematography it is overall more grounded and less symbolically rich. Despite now having a companion (however briefly) Nami still doesn't speak much - in fact she doesn't speak to Kudo once in their time together.

Whilst not a bad film, Grudge song never reaches the dazzling heights of Female Prisoner 701: Scorpion or Female Convict Scorpion: Jailhouse 41, and is a more conventional, more forgettable film.

I guess Meiko Kaji could see that the series had run its course. Toei evidently weren't entirely convinced as it was resurrected a few years later with a different lead actress and new director as NEW FEMALE PRISONER 701: SCORPION. I haven't seen it, but I don't see anybody talking about it so I assume they failed to capture the magic of the originals.

There have been multiple other Sasori reboots, spinoffs or what have you ever since, mostly more trashy and exploitative genre fodder as far as I can tell. Meiko Kaji was probably right to exit when she did, ensuring that she is still remembered 50 years on for her iconic performance in the classic originals.