Directed by
Genre
An unclassifiable enigma 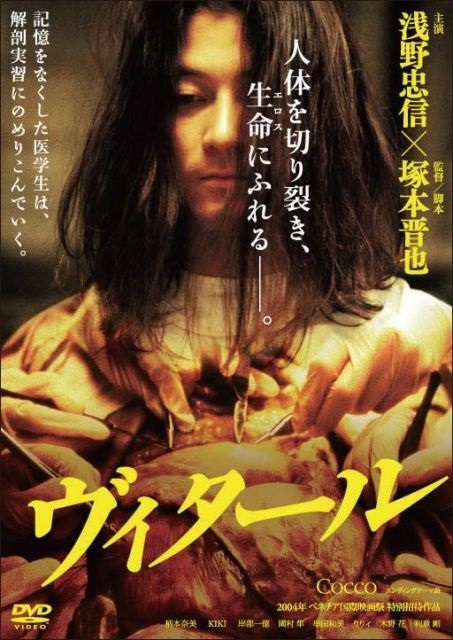 A promising young medical student is involved in a car crash and awakes with amnesia. He remembers his medical knowledge though, even if he doesn't remember acquiring it, so he continues with his studies. His class starts a module on dissection, and as he begins to investigate the body of a young woman assigned to his group he experiences fragmented memories. He learns that his girlfriend Kyoko was in the car when they crashed, and she didn't survive... but before she died she donated her body to medical science.

VITAL is a strange film, impossible to classify and hard to interpret. That's perhaps no surprise coming from Shinya Tsukamoto, one of the most unique voices in cinema, but VITAL is unusual even in his filmography. The film presents fragments from Hiroshi's life, chronological but incomplete, interspersed with sequences of dissection presented clinically and with detachment, and encounters between Hiroshi and Kyoko in an unreality somewhere between memory and dream.

According to Asian Movie Pulse Tsukamoto felt that society avoids thinking about death and wanted to make a film which addressed it.

It is certainly true that humans seem reluctant to face something which we all inevitably will one day, and doing so leaves people woefully unprepared for the experience. One of the things I value about the time I spent in Thailand is that Thai culture is much less neurotic about death, viewing it as a part of life and not something to be feared. I have tried to internalise this myself and to celebrate a person's life rather than mourning their death... I think it is healthier.

Whether or not VITAL promotes such an attitude is hard to say, it isn't an overt message but Kyoko's death is treated quite prosaically, as an event that should not be forgotten or denied but which shouldn't hold back those who still live. Hiroshi gradually moves on from focussing on Kyoko's body, now devoid of life, to his memories of her - distorted as they are.

This is by no means a straightforward interpretation of the film and it leaves many parts unexplained. Tsukamoto is not a careless filmmaker so I am sure there is meaning and purpose to them all, but I don't feel qualified to assess what it is.

Tadanobu Asano's performance as Hiroshi doesn't help matters, he remains unreadable for the most part, it's not clear how he is interpreting his world and what he feels about it. He is normally a very expressive actor so this must be a deliberate choice.

Hiroshi's classmate and lab partner (played by the mononymic Kiki) is just as indecipherable, despite being a lot more expressive. Her character's role is mysterious, she has quite a lot of screen time but she never really becomes a big part of the story, despite her best efforts to insert herself into it.

Nami Tsukamoto (no relation as far as I can tell) is mesmerising in her only film, captivatingly beautiful and graceful. She is apparently a professional ballet dancer, which explains why her brief dance is so beautifully performed.

I was left somewhat unfulfilled by VITAL, it presents some interesting ideas but doesn't really develop them, leaving the viewer to fill in meaning for themselves. I'm sure my interpretation of it will be different from others, and I don't know if any of us will be closer to what Shinya Tsukamoto intended - or if individual introspection was the only desired outcome.