Directed by
Genre
One of the very best kung fu films 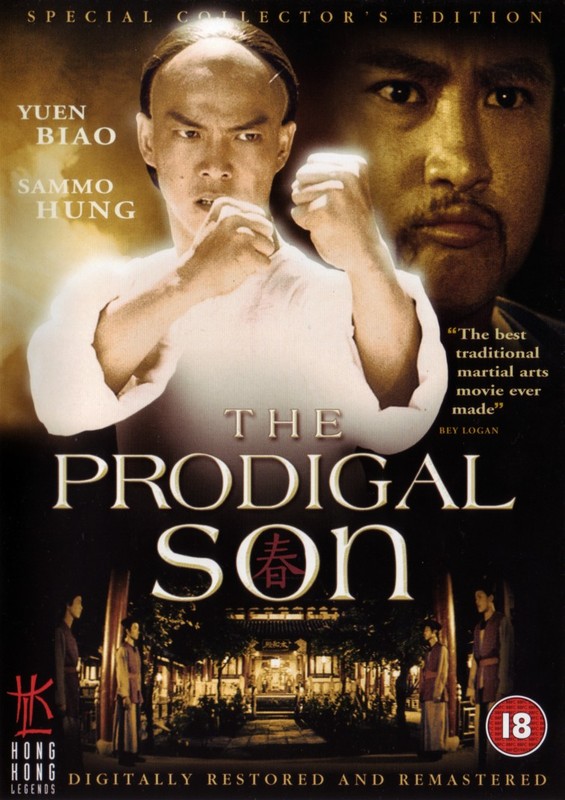 Leung Chang is the spoilt son of a wealthy family. Considering himself to be a kung fu expert he goes around town getting into fights, but his family secretly pays the townspeople to let him win because they don't want their only son getting injured. One day he challenges Leung Yee Tai, a Peking Opera performer and Wing Chun master, and learns that really he doesn't even know the basics of true kung fu. He resolves to become Leung's student, whether he wants one or not.

THE PRODIGAL SON capped an incredible run as a director from 1978 to 1981 for Sammo Hung, taking full advantage of the greater freedom and longer shooting schedules afforded to its talent by Golden Harvest to demonstrate exactly why they were thrashing Shaw Brothers at the box office.

I had long thought that Wong Jing wrote the script and it seems to be a common impression on the internet, but a widely spread error. Instead it was the first of many collaborations between Sammo and Barry Wong, who take some classic kung fu tropes and weave a clever story from them, with a deft balance of comedy, melodrama and appreciation for the dedication and training it takes to become a true kung fu master.

Yuen Biao and Lam Ching-Ying had proved their ability as part of Sammo Hung's stunt team but this was the first time he put them both front and centre and allowed them to truly shine. Sammo seems to have been content to stay behind the camera for the most part, only appearing on screen an hour into the film and disappearing again before the final showdown.

Both actors were in exceptional physical shape and Sammo utilises their skills to demonstrate the Wing Chun form and philosophy. Yuen Biao is hot headed but strong where Lam Ching-Ying is stoic and precise, but both execute the fast, fluid and intricate choreography perfectly. The fights and the training sequences are amongst the finest examples committed to screen.

Frankie Chan, at that time best known for providing the music for hundreds of films, demonstrates some surprisingly impressive martial arts talent of his own, creating a memorable character through his performance - I assume I'm not the only one who spent decades being amazed that Frankie Chan the famous martial artist also provided the music for hundreds of Shaw Brothers films before it clicked that it was actually the other way around.

Having a cast and stunt team he could trust would have allowed Sammo to more fully commit to the role of director and stretch himself there. The drama, pacing and presentation of the story are all grade A work, proving that Sammo had really become a great all round talent by this point.

THE PRODIGAL SON is one of a handful of films which evolved the kung fu genre to new heights around this time, but also somewhat ironically sounded its death knell. Sammo seems to have realised, as Jackie Chan did after The Young Master, that they had taken the traditional martial arts film as far as it could go and needed to change direction to keep growing as film makers. It took Jackie one more film to figure it out but Sammo seems to have understood straight away that there was nowhere to go from here, and it was to be the last traditional kung fu film he would make (arguably with the exception of Pedicab Driver).

As a swan song to the genre THE PRODIGAL SON ranks right up there with Eight Diagram Pole Fighter and THE YOUNG MASTER. I still consider Sammo's previous film Encounters Of The Spooky Kind to be his best work but THE PRODIGAL SON is right up there with it - I wholeheartedly apologise for ever having rated it less than a 10/10! My only complaint is that I wish the final fight was about an hour longer!

As a side note the Hong Kong bluray looks alright but the 7.1 audio is a complete mess and the subtitles are trash. I started watching it but had to stop and resync the audio and subtitles from the HKL DVD to it before I could continue. Here's hoping it gets the release it deserves before too long.