Directed by
Genre
Sequel switches onto a different track 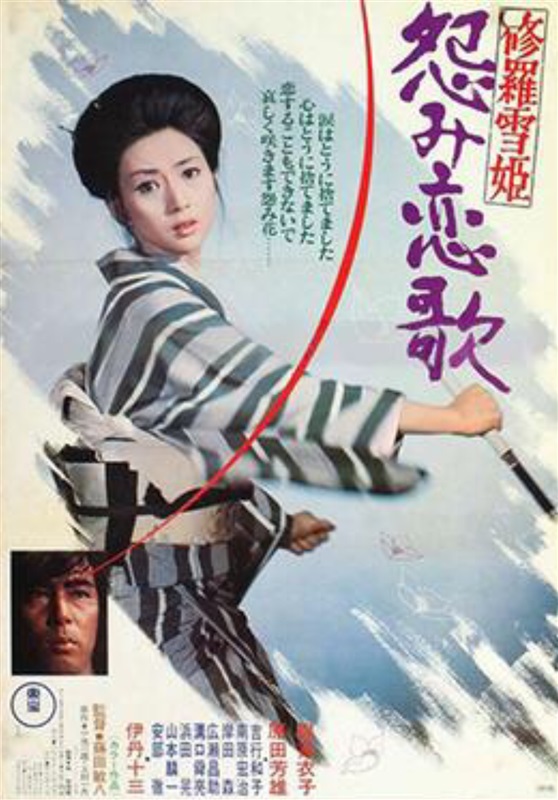 LADY SNOWBLOOD is on the run after massacring her way to vengeance. A handsome trapper finds her wounded, feeds her and tends to the wound... then turns her in to the police. She is promptly sentenced to death but then liberated by a mysterious group who want her to work for them as an assassin. Her first target is an anarchist who has a document that could bring the government down.

It's been a few years since I last watched the original, but I don't think that matters too much as they're quite different - it might even be an advantage as it probably pays to treat them as separate films. This time Shirayuki Hime gets involved with politics, class struggle and government corruption... not that she seems particularly interested in any of it herself, but that's what the men around her are all about and they're the ones driving the plot here.

Every so often somebody gets it into their head to try and kill her though, and they inevitably end up regretting it.

It feels a bit like a story about a group of anarchists had Lady Snowblood shoehorned into it, but apparently it's still based on the manga. It shares some of the same flaws as Female Convict Scorpion: Grudge Song but also the same virtue - whatever else is going on it's still got Meiko Kaji in it. It's never not going to be a pleasure watching Meiko Kaji carving people up. Even if the choreography is a bit rough in places (you can see people fumbling their blood bags several times) there's still a suitable amount of arterial spray and a couple of delimbings.

This sequel doesn't have the same style or mood as the original, and certainly isn't as good, but taken on its own merits it's an OK bit of 70's slice and dice.