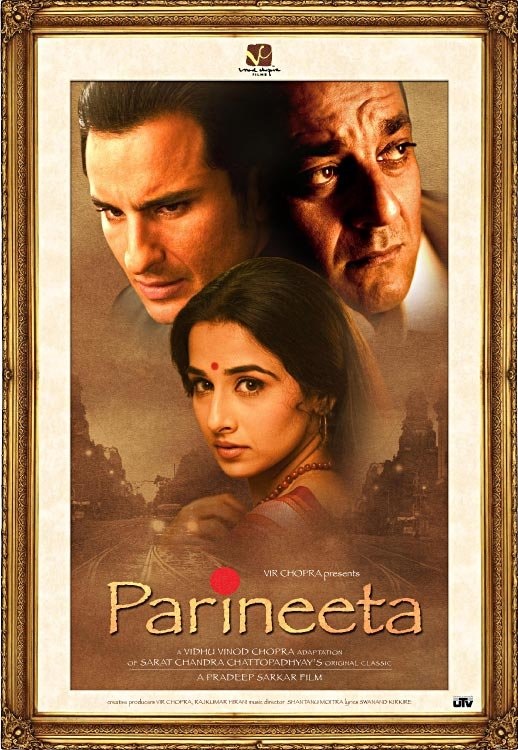 Shekhar and Lolita seem destined for each other from childhood, but we know from the first scene that something is amiss, as the film begins with Shekhar about to marry another woman and Lolita already wed... after which the film goes back in time to show us their meeting and growing up together, to explain how the first scene was reached.

PARINEETA is based on a 1924 novel by the guy that wrote Devdas, but moved relocated to 1960's Calcutta, which forms a gorgeous backdrop for the story. The production design and cinematography are luscious, and the soundtrack equally beautiful. There are times when PARINEETA has the feel of a classic and classy melodrama, beautiful and romantic... but there are others when it is so corny it shoots itself in the foot... or blows half its leg off.

The leads Saif Ali Khan and Vidja Balan (her first movie) are suitably beautiful and do a pretty good job with the acting. But what gives with casting Sanjay Dutt as a romantic rival to Saif? Or to anyone human (and some of the more attractive mammals) for that matter. The idea that he is a "handsome" and debonair rival for Lolita's affections is absurd - the audience quite literally burst out laughing at the suggestion. And he's not even much of an actor - I'm fine with him when he's busting heads, but he was not right for this part at all (IMHO).

Whilst the direction by Pradeep Sarkar (another first-timer) is mostly assured and accomplished, there are other times when it is excessively heavy handed - particularly some of the shots + sound cues used to imply the onset of melodramatic conflict - again, the audience were reduced to laughter when that was clearly not the intent.

As such, PARINEETA veers between really rather good and really rather bad, with me contemplating scores anywhere between 9/10 and 3/10 at various points. Unfortunately the ending is one of the weaker parts, leaving the film on a lower score than it would probably have had if it had resolved itself in a less corny and unbelievable way... last impressions count, kids! So I think I'm going to settle on... 6/10.