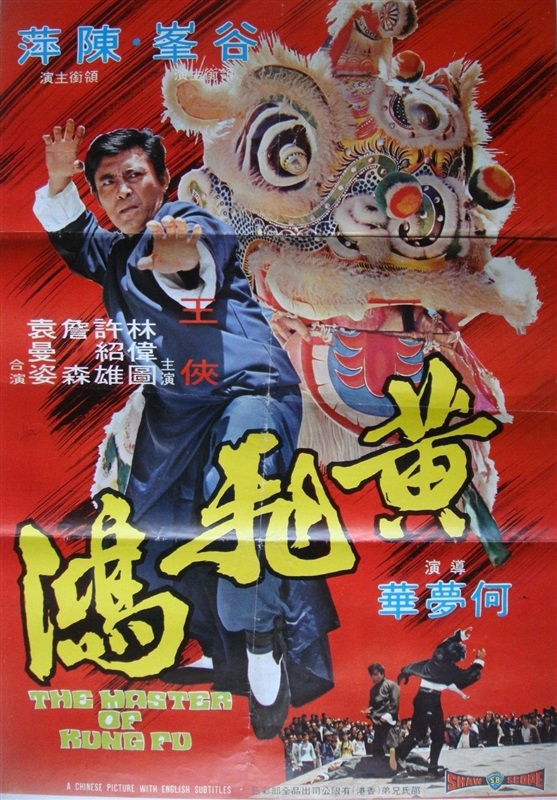 Foreigners trade crates of opium for Chinese antiques with the collusion of a corrupt mayor, but the mayor has greater ambitions. He hires a notorious killer to compete in a martial arts tournament to win the job of security chief for the foreigners, so that they can use his access to steal the antiques for themselves. They soon realise Wong Fei-Hung is going to be a problem for their plans though, and devise a scheme to get him out of the way.

It's hard to evaluate THE MASTER OF KUNG FU without thinking of the Wong Fei-Hung films that came after it, and compared to Once Upon A Time In China, Martial Club or Drunken Master II it can only disappoint since those are three all-time classics of kung fu. Even the oldest of those was still 8 years away though, so at the time there was only the long running series where Kwan Tak-Hing played the character - and even the Golden Harvest reboot of that The Skyhawk was still in the future.

I think most of the old Wong Fei-Hung films are now lost to history, but the bits I've seen don't suggest we're missing much, popular as they were at the time. In this context THE MASTER OF KUNG FU probably presented a thrilling new image of Wong Fei-Hung as a national hero and moral exemplar, with real kung fu skills and more modern fight choreography courtesy of Yuen Wo-Ping and Yuen Cheung-Yan.

It wasn't exactly the only kung fu film being made at the time though, and compared to contemporaries like Boxer From Shantung or Fist Of Fury it's solid but unremarkable, with Ho Meng-Hua's direction perhaps being a bit civilized compared to Chang Cheh's bloody rampages or Bruce Lee's tightly coiled rage.

All the ingredients are there, the proud hero who teaches forbearance whilst resisting the corruption of China by foreign powers, a peerless fighter who would rather use his knowledge to heal than to hurt, and of course the antics of his young and impetuous students... the presentation is just a bit flat. Even a more rousing soundtrack would have made a difference - the traditional Wong Fei Hung theme is conspicuous in its absence.

Ku Feng is a great fit for the Wong Fei-Hung character, having the gravitas and class but also able to dish out the beat downs when required, it's a shame he never returned to the role (though he did play Fei-Hung's father Wong Kei-Ying in MARTIAL CLUB). Whilst his kung fu was never as flashy as some of the bigger stars he did have genuine skills and the fights here are pretty good.

There is plenty to like in THE MASTER OF KUNG FU, there's just not much to make it stand out from the crowd.