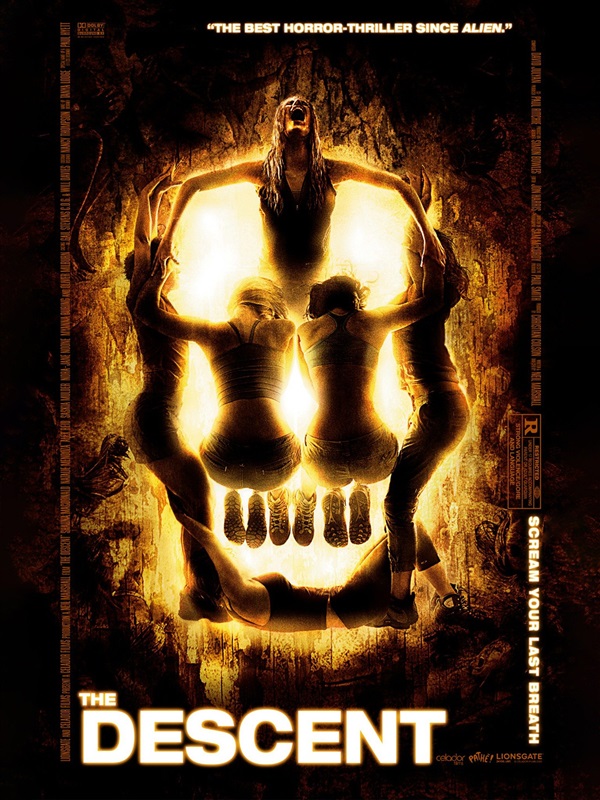 A group of women meet up in a remote part of the United States to go spelunking. They're all adrenaline junkies but since this is the first meet since one of them lost her husband they decide to keep it safe and explore a well mapped cave. At least, that's the plan until one of them decides it would be more fun to explore a cave that doesn't appear on any maps at all.

I was under the impression that I'd never seen THE DESCENT despite the fact it was Neil Marshall's follow up to Dog Soldiers, of which I was a big fan. The fact that I twice knew what was going to happen well before it did suggests that I have actually seen it before though, and it was probably his next film that I skipped due to poor reviews.

Horror is not really my cup of tea because, fundamentally, I don't like being scared. Luckily I'm not particularly easy to scare so I can probably count the films that have genuinely frightened me on one hand; it's not an experience I am keen to repeat though. THE DESCENT skirts the line between frightening and thrilling quite effectively. There are definitely too many jump scares (the maximum number of effective jump scares a film can contain is two, and you've got to be really good to make that second one worth it) but they give way to a more visceral fear later.

When it's not using cheap tricks the film is very good at building tension, the claustrophobic environment of the caves is naturally quite anxiety inducing and the excellent lighting really creates an atmosphere. I was shocked to discover that they built the caves in a studio... it did seem impossible that they could have filmed it in actual caves, but even more impossible that those caves aren't natural. Stellar work, cave makers!

Apart from Sarah we don't really learn anything about the characters' lives or back stories, but we come to know them through their actions well enough - just enough that when the time comes to start reducing their number we feel their loss.

When the tension the film has built is finally released it goes off with a bang. Once the women realise they are not alone in the cave things become frantic, with moments of heart pounding terror, until it settles into a state of heightened and sustained anxiety. Eventually the surviving characters realise they're going to have to fight back, which produces an intense action climax.

THE DESCENT has similar ingredients to DOG SOLDIERS but a clearly higher budget, the cost of which is apparently less wit and humour sprinkled in. There's still plenty of gore though, but the over the top budget splatter becomes more actual yuck and "that looks painful". The film is generally played straighter than its older sibling.

This is on the boundary of what's enjoyable as a horror film for me, not so frightening that I won't be able to sleep tonight and with enough other ingredients (action and thriller) that it's not just relying on scares to entertain. It shows that the talent that shone through the budget limitations in Neil Marshall's debut was no illusion - which does make me curious why DOOMSDAY wasn't so popular.