Directed by
Genre
Stands out from the crowd 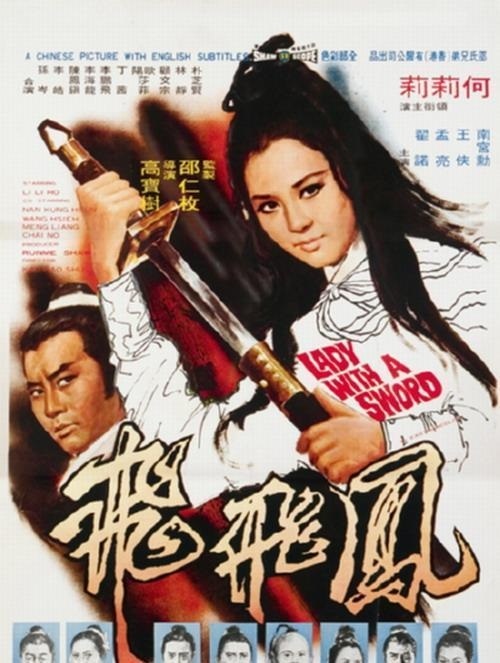 The head of a security bureau is killed by bandits, so his wife and son travel to his parents home to ask them to seek vengeance for him. They have almost arrived when they are themselves attacked by thieves and the mother is killed when she resists being raped by them. The son manages to escape and reach his grandparents' place, where he tells his aunt Fei-Fei about his ordeals. He describes the villains and what he overheard of their plans, so she grabs her sword and heads out to avenge her sister's murder. When she tracks the culprits down she discovers a personal connection that complicates the situation.

LADY WITH A SWORD was directed by Kao Pao-Shu, a veteran actress who had appeared in about 100 films over the previous 20 years and served as assistant director on a couple. I believe it was the first time Shaw Brothers employed a female director, so she must have felt a lot of pressure to prove herself, which is perhaps reflected in the film's ambition.

The story is more emotionally complex than many of the wuxia churned out in this period, with a plot that involves multiple factions and conflicting loyalties, woven around a strong central performance by Lily Ho as... actually one of several ladies with swords, now I think about it. The plot reveals its facets methodically, via a series of twists and reversals.

Female-centric wuxia were common in this era, but it does feel like this film presents a more authentic female perspective than those from male directors. Apparently making it was not a great experience for Kao Pao-Shu though, as she parted ways with Shaw Brothers after directing this film and set up her own production company in Taiwan, where she would direct another 10 films over the next decade. Unfortunately it seems likely most of these are now lost.

Despite being a short film (just 84 minutes on DVD) it packs a lot in, and is action-packed considering the richness of the story, with numerous fight scenes throughout and a lengthy climactic battle. The choreography is surprisingly progressive, featuring camera work and editing that seems years ahead of its time. Co-choreographer Hsu Erh-Niu is one of the unsung heroes of this era, responsible for many of the most innovative action scenes such as the terrific work in The Black Tavern and Intimate Confessions of a Chinese Courtesan.

There's some wirework but more reliance on trampolines and editing to produce the high flying wuxia moves. The construction of fight choreography via creative edits is reminiscent of the pioneering work Ching Siu-Tung would do a decade later, but it's mixed in amongst longer takes and more traditionally choreographed sequences. It must be admitted that there is some heavy undercranking at times, which looks conspicuous to our modern eyes, though it's not as cartoonish as it would get in certain 90's films.

We also get a great "kung fu kid" performance by Meng Yuen-Man, one of the less well known members of the Seven Little Fortunes, who proves to be just as acrobatic as more famous members like Yuen Biao and Jackie Chan and quite game for being thrown around the set. I'm surprised he didn't become a bigger star.

LADY WITH A SWORD is above average in most respects, and is fine-looking despite probably having a small budget compared to films by more established (and male) directors. There's more vision and artistry in Kao Pao-Shu's direction than Lo Wei ever mustered, and it's a shame Shaw Brothers didn't offer whatever it would have taken to keep her on the team - I'm sure she'd have been an influential force on the development of the wuxia genre.