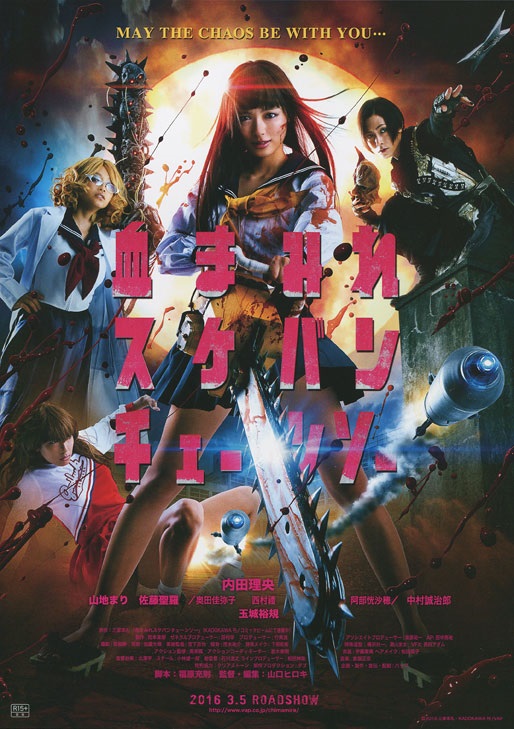 Giko Nokomura styles herself as a sukeban, a juvenile delinquent who rocks up to school each day carrying a chainsaw. One morning she is ambushed by a group of students who try to kill her. After dismembering them with the chainsaw she observes that they are mutant cyborgs, and they tell her they have a message from her classmate Nero Aoi - she's coming for her.

Giko has no idea why Nero has it in for her, she just wants to sit her final exam so she can graduate, but since Nero has transformed half of the school into cyborgs there are some obstacles in her way. Can she fight off her attackers, complete her exam and learn why Nero wants her dead?

BLOODY CHAINSAW GIRL is unsurprisingly based on a manga, Chimamire Sukeban Chainsaw, and has all the over the top style and violence you'd expect (and the panty shots). It's silly and cheesy and gross, but has a visual polish beyond what might be expected from the genre and budget. With chainsaws and cyborgs you know there's going to be some gore, and whilst it doesn't quite deliver the glorious extravagance of Yoshihiro Nishimura's work in The Machine Girl or Meatball Machine: Kodoku, it doesn't disappoint.

The film is short and gets straight to the point, but it manages to create a certain amount of intrigue and pathos thanks to the character of Nero. Why is one of the school's most beautiful girls transforming her classmates into a cyborg army and what is her grudge with a sukeban she has barely interacted with? Giko herself is not particularly interested in the answers, but isn't left with much choice about finding them anyway.

This sort of film isn't expected to deliver a lot of depth or emotional weight, that's not their raison d'etre, but BLOODY CHAINSAW GIRL weaves in just enough commentary on high school subcultures and bullying to add a bit of substance to its splatter without getting bogged down by it. Whilst Japanese schools might not literally be turning kids into monsters and carving them up with chainsaws, it's a pretty tough environment for a lot of them.

The prime time for this sort of film was in the late 2000's so BLOODY CHAINSAW GIRL perhaps arrived too late as it doesn't seem to be very well known, but I'm glad people still find the time and money to make splatter comedies every once in a while. This might not be one of the very best examples but it contains enough imaginative carnage and gleeful gore to entertain for 75 minutes.