Directed by
Genre
I do not like where this series ended 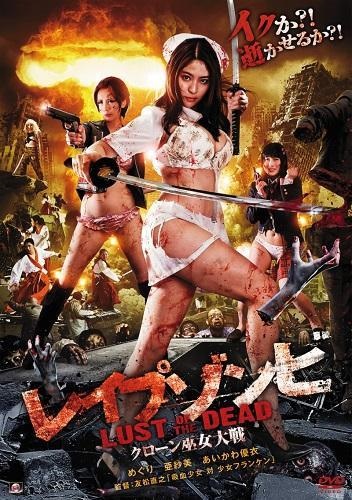 Lust Of The Dead 4 begins where Lust Of The Dead 3 should have ended, with a showdown between the American robot and the Asami clones. Actually it begins with a recap of the previous films, which takes 13 minutes, and since original actress Alice Ozawa was apparently no longer willing or able to participate she has been edited out with shots of her replacement, Megu Fujiura inserted instead... she proves to be a terrible actress.

After the fight (which is pretty cool, and would have been a great finale for Rape Zombie: Lust of the Dead 2 & 3) we skip forward 5 years, Momoko's child is now grown up - rather more than 5 years worth in fact - but without their mother, since Momoko dies early on. Nozomi and the remaining survivors are struggling, food is running out and the rape zombies are still a threat. Things are looking bleak for the human race, and they conclude that the only way to fix the problem is to travel back in time and try to change the past.

Meanwhile the "evolutionary scientist" who first appeared in the original Rape Zombie: Lust of the Dead has somehow survived and recovered the head of the American robot, which he keeps in a lab seemingly for no reason except to try to convince her of his belief that the rape zombie phenomenon is actually the Y chromosome reasserting itself after modern women have emasculated men by demanding such outrageous things as equal pay and not being groped by strangers, which apparently threatens the survival of the species. Momoko's child Akira also pays him an occasional visit to hear him recite random bits of religion, philosophy and science like they're living in a Mamoru Oshii movie.

In the first film the scientist delivered a deranged rant asserting that men should go out and rape to their heart's content and was then immediately coshed over the head with a plant pot, thus demonstrating how such views are supposed to be received. In these films he is given far more opportunities to make misogynistic speeches and receives very little pushback - even seemingly convincing the robot head that his views are scientifically sound. 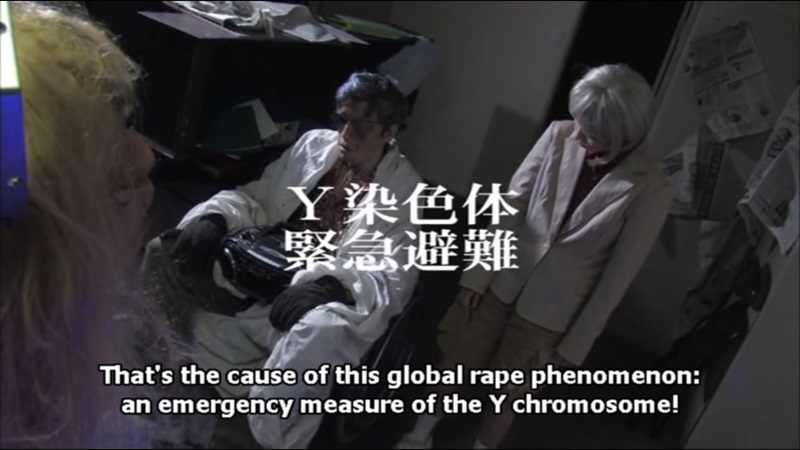 He variously claims that rape is a natural biological response, women actually want to be raped really, and men have a right to kill women who refuse to sleep with them because women who won't follow the biological imperative to procreate have no place in the species. Yeah. And nobody punches him in the face or shoves a stick of dynamite up his ass. It is a problem.

I had misgivings about the end of the third film, where some of the women seemed to be enjoying their violation when the camp was overrun by rape zombies, and was hoping that the concluding parts would provide a reversal and a return to the more feminist stance of the first film. Sadly they do not, and this is a stain on the series that makes me feel bad about having enjoyed the first film.

I will say that the scientist is never presented as a hero or somebody whose views need to be accepted - the main characters do not subscribe to them and do not align with him - indeed his influence over Akira eventually becomes a problem for them to overcome. He's not quite presented as the films' villain either though, and is given too many opportunities to expound his theories with nobody to make counterarguments - or rebuke him with extreme violence.

I don't want to assert that Naoyuki Tomomatsu subscribes to these views himself, though he's clearly done quite a lot of reading in the area given the numerous quotes presented. Also he did make a series of films about rape zombies, and if you're going to do that you really need to be pretty clear where you stand on certain issues.

At the very end we get a coda taking us back to before the zombie outbreak, where we see the "good otaku" character talking to the members of his school film club about an idea he's had for a film called "Rape Zombie", and what the message of the film would be (and therefore what we're supposed to take away from the series ourselves): 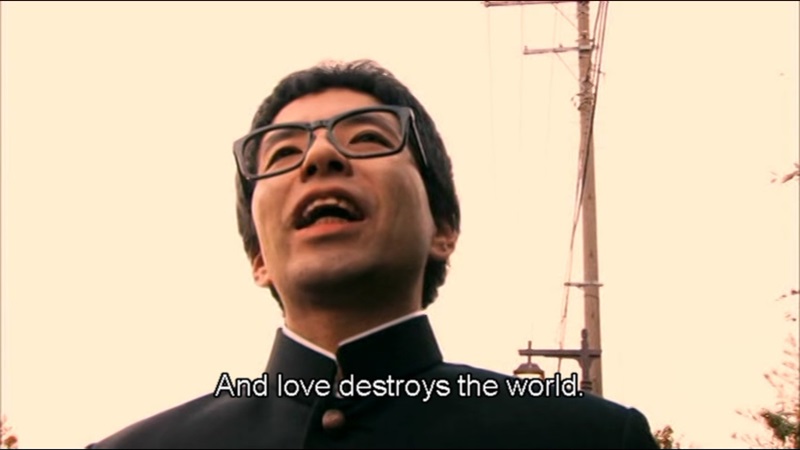 Well... it's certainly better than "rape is good", but it's not the passionate condemnation of toxic masculinity delivered by Asami in the first film either, which is what I wanted to see. I still think the first film can and should be read as such, but perhaps that was thanks to its co-writer and Naoyuki Tomomatsu didn't even realise he was making a feminist exploitation film.