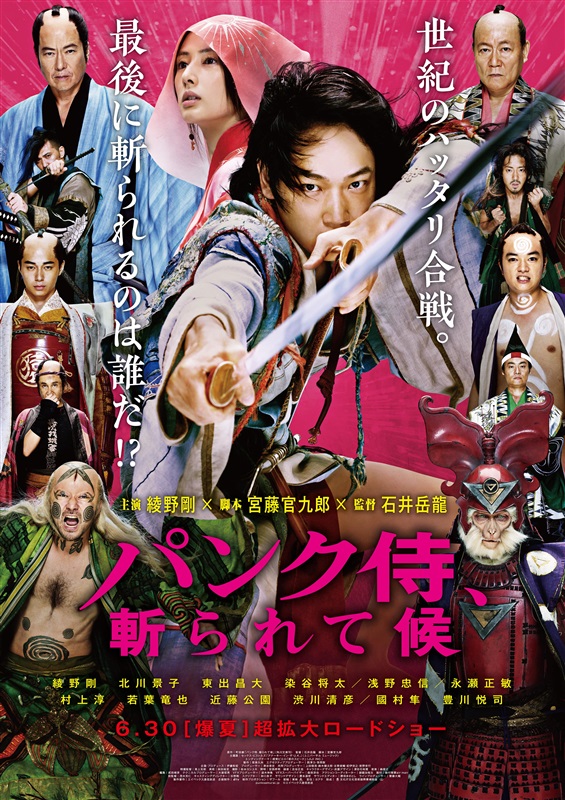 A ronin named Junoshin (Go Ayano) hatches a plan to get hired as a samurai, claiming that a feared cult of mystics known as the Harafuri have entered a clan's territory and only he knows how to counter their corrupting influence. One of the clan's retainers sees an opportunity to gain advantage over a rival and throws his support behind Junoshin's petition - but since the Harafuri disappeared ages ago they realise they will need to rustle up a sham cult to defeat so they can prove their worth.

PUNK SAMURAI SLASH DOWN is one of the most bizarre films to come out of Japan in recent years, and since this is Japan we're talking about that means it is pretty fucking bizarre. Whilst it has the trappings of a samurai film and features sumptuous production designs and cinematography reminiscent of Rurouni Kenshin, the tone is quirky and irreverent and the content is outlandish - though it's a while before it reveals just how much.

The film builds gradually, introducing new elements that expand the scope of the story and the world. It's one of those films where you can't predict how it will end from how it begins, even though it makes sense at each step of the way... most of them anyway.

Things start off innocuously with a familiar scene of a ronin on a highway, but any expectation that this is going to be a traditional jidaigeki is soon upended as the film flirts with then subverts genre tropes and twists the narrative into a more satirical direction.

The tone veers unpredictably, including into rather puerile comedy at times. I'm not a fan of "comedy" Go Ayano, and unfortunately he succumbs to the same mugging here that made him the weakest link in Shinjuku Swan. Thankfully he is supported by an otherwise stellar cast, with Tadanobu Asano in particular delivering his most memorable performance in years as the last surviving member of the Harafuri cult.

Jun Kunimura brings a lot of nuance to his relatively small part, somehow reminding me of his role in The Wailing even though it really couldn't be more different, and Keiko Kitagawa and Kiyohiko Shibukawa also provide strong support with more conventionally dramatic parts.

Gakuryu Ishii treats the material with a flamboyant and psychedelic visual style that is at odds with the expected grandeur of a samurai film, producing a stylised look that suggests a manga inspiration even though the film is actually based on a novel. There are some stunning images, it's a film that looks very accomplished.

PUNK SAMURAI SLASH DOWN is so jam packed with creativity that it's inevitable that it is a bit uneven, but it's one of the most fun films I've seen lately, and it makes me realise I've neglected Gakuryu Ishii as a director and ought to pay him more attention.