Directed by
6/10 - Could have been something more 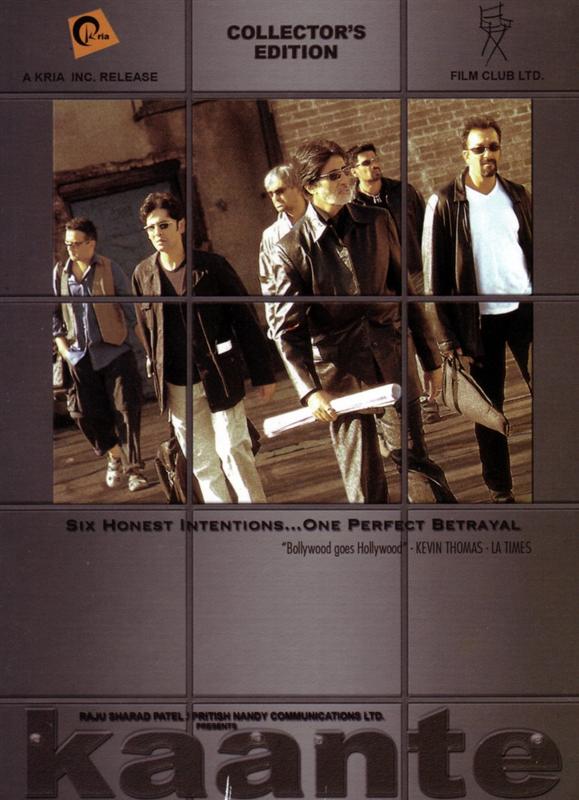 I'm still not quite sure why I had to wait nearly 4 years before I could see KAANTE, the Bollywood remake of Reservoir Dogs starring Amitabh Bachchan... the DVD just seemed to get held up in limbo, and eventually I stopped checking for it every month or two so I'm not sure exactly when it did finally come out.

Was it worth the wait? No, not really... I might have enjoyed it more 4 years ago, but I've moved on and the times have moved on, and now it's just kind of... "meh".

The plot is largely familiar... a group of small time crooks living in LA come together to pull off a big job... to rob the American Service Bank, the bank where all the cops have their accounts (apparently). The heist goes awry, and they suspect they have a mole in the team.

RESERVOIR DOGS was already a remake itself - of Ringo Lam's City On Fire. However, Tarantino significantly changed things... switching the focus of the story from the undercover cop infiltrating a criminal gang to the gang itself, and replacing the nihilistically downbeat noir-ish vibe of CITY with a hip, street-talking post-modern sort of self-awareness (i.e. some witty dialogue). KAANTE retains the focus on the gang but largely dispenses with the wit & humour... it's a relatively straightforward tale of crime (spread out over 2.5 hours with some musical interludes, naturally).

KAANTE's main claim to fame is that it was the first Indian film shot in the US... "Bollywood Goes Hollywood", as the box claims, and it's quite literally true. There is some attempt to explore the racism that the Indian community in LA encounter, with the police always picking them up as suspects and harrassing them... this supposedly provides the motivation for them to actually commit the crime, since they're always being accused of it anyway... hmmm.

Technically, the film is fairly well realised... quite slick and stylish (though the yellow filters which are used on outdoor scenes, presumably to make us think "smog", get a bit much). The acting is pretty good, the script is ok... the film just doesn't have much of a personality of its own. When Tarantino remade CITY ON FIRE he gave it a unique style and spin, made it into a film of its own. KAANTE doesn't seem to have such ambition - it's happy just to be "the Bollywood remake of Reservoir Dogs". Taken on these terms, it's not a bad effort... but the viewer may well be left wondering "was it really necessary?" and "couldn't it have been something more?".