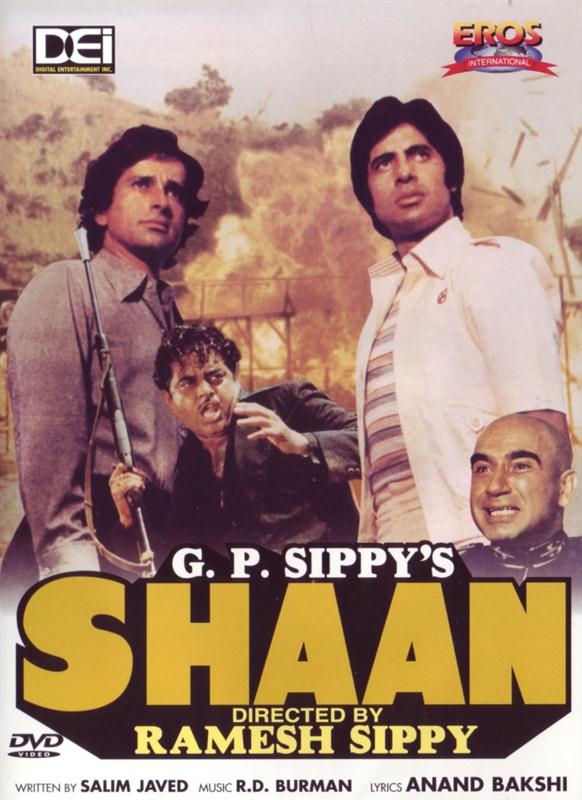 5 years after the breakthrough success of Sholay, director Ramesh Sippy once again teamed up with Amitabh Bachchan - and this time they're taking no prisoners. SHAAN is a grandly conceived epic of action, adventure, comedy, romance, drama and a bald supervillain who keeps a man-eating crocodile in his underground lair.

Amitabh Bachchan and some other guy are bad guys! But they're not the kind of bad guys you hate... they're the lovable rogue types. They're con-men, but they only con other bad guys. Their policeman brother knows this, and when he arrests them it's really for their own good. When they get out of jail he's there as a brother to support them, and they earnestly decide to try and go straight. But their plans of living an ordinary life are foiled when they get caught up in the investigation of super-villain Shakal, a bad guy in the best James Bond tradition played brilliantly by Kulbhushan Kharbanda. The good bad guys have to go up against the really bad bad guys!

SHAAN is like every movie ever made all rolled up into one, and barrelled through at a pace that makes the 195 minute running time seem very brief. It rides a little roughly, with some pieces of plot development and editing that challenge logic and continuity, but with tons of energy and enthusiasm. It's not as carefully crafted as the masterful SHOLAY, but it does provide the same kind of fun and thrills that make Don such great entertainment. It's a grandly ambitious movie that sometimes skirts the line between genius and simple madness very closely. It's the kind of movie they just don't make anymore!

A movie so grandiose can only work with a cast up to the task, but Amitabh rises to the occasion, oozing cool and commanding the screen most of the time. As with SHOLAY though, the bad guy nearly upstages the heroes - he definitely has all the best lines (plus an island fortress surrounded by sharks!).

SHAAN may borrow most of its elements from other movies (notably the James Bond movies), but it has enough personality of its own to make them seem fresh and special all over again. You just can't help grinning at the sheer silliness of it all, and getting carried away by the melodrama. It's a movie treat, jam packed full of high calorie entertainment. What better way to spend a Sunday afternoon?