Directed by
Genre
It's an Indian Cowboy Movie! 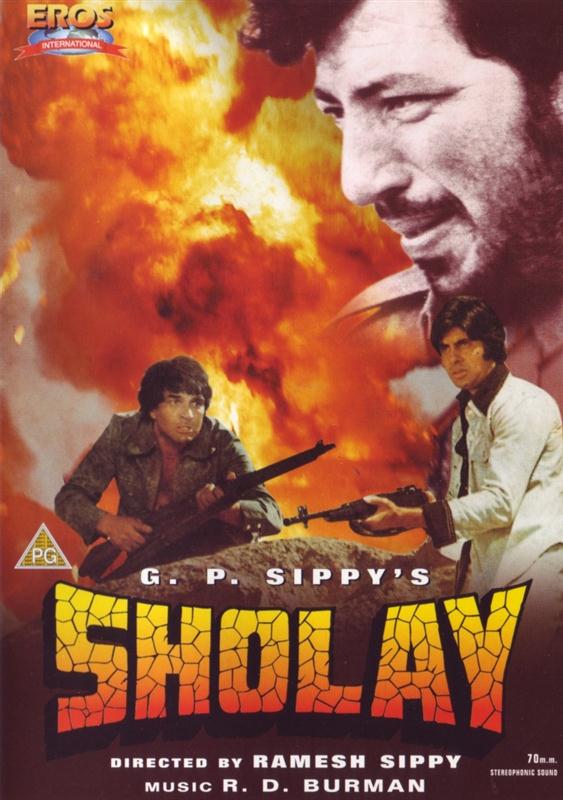 It's an Indian Cowboy Movie in the mould of Seven Samurai and YOJIMBO!

A retired police captain recruits two career criminals to help him defend his village from a group of particularly nasty bandits. The two crooks are apparently the bravest men he ever met - and pretty good natured fellows too, for that matter. They agree to take the job, initially just for the cash, but gradually because they come to like the villagers and their lifestyle. Everything is rosy as they fend off the first bandit invasions, but everybody knows that bandits whose power rests totally on fear can't let it go when they suffer a loss.

The movie doesn't really deviate too far from the genre format, but in its 3.5 hour runtime it gets chance to develop the story to quite a degree, and it's a pretty well crafted movie. I did shorten that runtime a little by forwarding through a couple of songs, but it still clocked in at 3+ hours and kept my interest throughout. The main reason for this is the performances - a good one from Dharmendra as one of the crooks, and a fantastic one from young Amitabh Bachchan as the other. Apparently this is the movie that made Amitabh a superstar, and you can see why. He easily steals the screen from the then more famous Dharmendra, oozing cool like James Dean on Quaaludes. Even he is sometimes in danger of losing screen command from their nemesis, the nasty bandit head Gabbar Singh (played by Amjad Khan). He's a villain who is given a lot more depth and character development than villains normally get in a movie. He's a bastard, for sure, but whilst you dislike him you also understand him, and perhaps secretly admire him.

The character dynamics, and the cat and mouse play between our heroes and our villains are all very confidently handled, and deftly shaped. There's quite a bit of action, some of which is rather bad (the 'oh, you hit me - I should fall over now then' school of stuntmen), but some of which is quite thrilling. There's some comedy, mostly from the chatterbox village taxi girl and Dharmendra's attempts to seduce her, there's some melodrama and some pathos... and there's Amitabh nonchalantly wandering through it all like a king (it's hard to remember he's meant to be the 'sidekick' here). There's some song and dance routines naturally, though personally I wasn't too keen on some of the songs.

SHOLAY is apparently considered to be one of the all time classics of Indian cinema. I haven't really seen enough Indian movies, especially pre-90's, to judge this, but I think the verdict is perhaps coloured slightly by nostalgia - or maybe needs to be seen in historical context. I don't think it's better than Satya or Zakhm anyway. I don't think it's quite as good as the Kurosawa movies that defined this genre either, but it's still rather a good movie :).