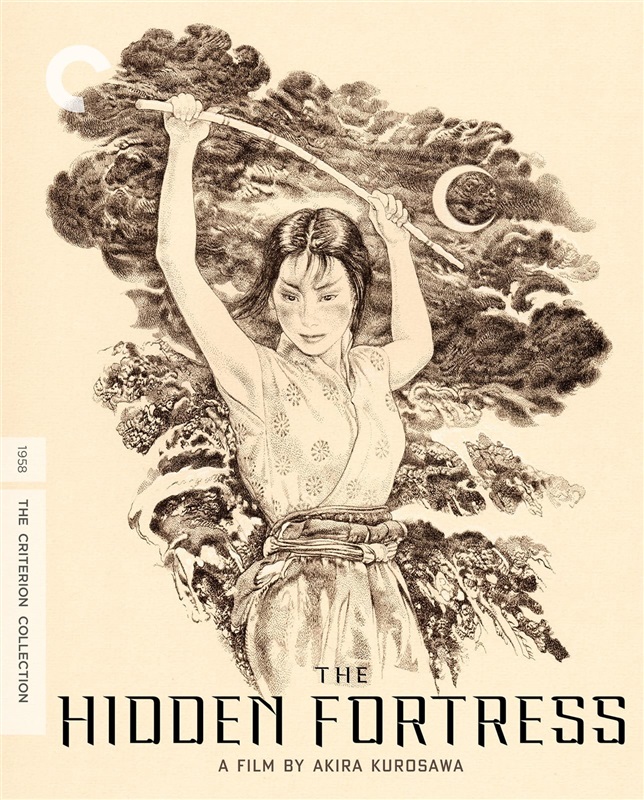 The war between the Akizuki Clan and the Yamana clan ends with the Akizukis destroyed and their young princess hidden in a remote mountain fortress with her handmaiden and loyal general Makabe Rokurōta. Two peasants who joined the war hoping to find riches are trying to make their way home avoiding the armies and checkpoints when they stumble upon Rokurōta, who offers them gold if they help him find a path to safe territory.

THE HIDDEN FORTRESS is beautifully lensed, fully taking advantage of the widescreen format and the dramatic locations, along with the veritable armies of extras employed for certain scenes. This was Kurosawa's first widescreen film, and of course he took to it like a natural.

Toshiro Mifune is a suitably awe inspiring presence as Makabe Rokurōta, and Misa Uehara is almost his match. Apparently she was a first time actress who had never considered it before, but after Kurosawa rejected every applicant for the role Toho's employees were tasked with finding someone that fit his vision, and when she was spotted in the crowd at a theatre they persuaded her to meet the director, who decided she was just what he was looking for.

The decision to tell a story of a war from the perspective of two of its least significant participants was an interesting conceit, but the peasant characters are so relentlessly cowardly, venal and fickle they do become a drag on the film.

Akira Kurosawa was a bit of an elitist and his contempt for the common folk is never more apparent than here, though as usual he reserves actual blame for the elites of society who fail to fulfil their noblesse oblige and protect those who can't reasonably be expected to take care of themselves. It's a decidedly patrician view that can be seen in most of his Samurai films.

THE HIDDEN FORTRESS is less action packed than Seven Samurai, but it does feature a superb spear duel between Rokurōta and a general from the opposing army that feels very authentic.

When discussing THE HIDDEN FORTRESS it is obligatory to mention that it is the film that inspired Star Wars, since you probably wouldn't guess it if nobody told you. You can definitely see the influence when you look for it, particularly in the characters of R2D2 and C3PO, but it's more than just a sci-fi remake... and Toshiro Mifune is cooler than Harrison Ford ever was.