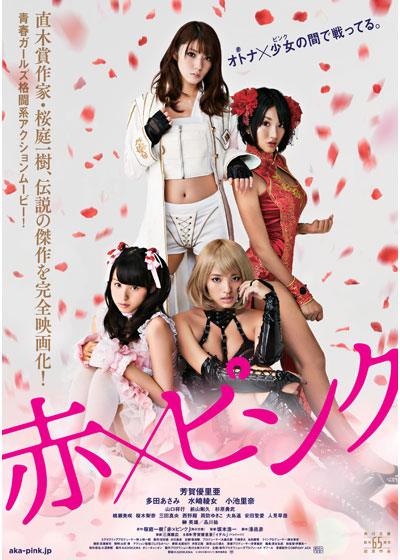 Each night in an abandoned school in Roppongi, a group of girls with boring every day lives don costumes, assume their stage personas and enter a cage to fight each other in front of an audience. The fights are largely for show, nobody is getting seriously hurt, and when not in the ring the girls can mostly be found on the laps of their more dedicated/affluent fans. One day a new arrival turns up looking to join the crew, and in her first fight it becomes clear that she is no ordinary girl but a trained fighter, skilled and deadly. Before long her even more deadly, even more skilled husband (Hideo Sakaki) turns up, wanting to know why she ran away from him and demanding that she return.

A fair amount of the run time is spent with the girls fighting - either each other or Hideo Sakaki's goons, and in general the choreography is pretty good. Some of the the stage fights are more playful and titillating, but off stage (and sometimes on) the fights can get quite brutal and thrilling. Some of the girls at least seem to have genuine martial arts training, although there's enough fast cut editing that I couldn't swear to it in court.

In between fights we largely learn about the girls' backgrounds and private lives, the particular combinations of boredom and misfortune which led them to seek whatever it is they expect to find in an underground fight club. Four of the girls in particular get the vast majority of the character development, and through various scenes they form a close bond.

So, a film about women finding themselves and seeking empowerment in the ring, right? Everyone can get behind that, I assume. But then the film regularly throws in an interlude with some gratuitous nudity, fan service or some quite lengthy soft core sex scenes and you're left scratching your head about what exactly they're trying to say, and to what audience.

Either way, it's definitely one of those "only from Japan" films, and I'm glad it exists. Whether you're looking for some solid fight scenes, some touching female bonding or some quite tasteful lesbian sex scenes, or even if you just missed seeing Hideo Sakaki throw down, you won't reach the end of credits of GIRL'S BLOOD entirely disappointed, at the very least.