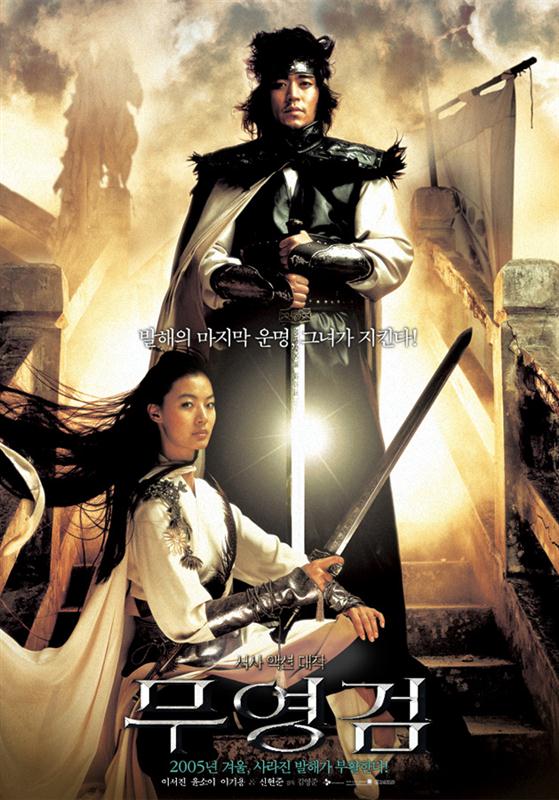 A young female warrior is sent to bring the last surviving prince of Balhae back from exile, to rally the people and take back their land. The prince is living a scoundrel's life, and rather reluctant to rise to the occasion. A group of bloodthirsty warriors from the occupying forces want him dead anyway.

Like Kim Yeong-joon's previous film Bichunmoo, SHADOWLESS SWORD tries to capture the visual style of early 90's Hong Kong wuxia, without also incorporating the sense of unpredictable insanity that made that period of HK cinema so much fun. The stodgy script telegraphs anything that might have been surprising a mile before it arrives, though since most of the events are cliched it's hardly necessary. The film is quite humourless, although the camp mugging of some of the bad guys made me wonder if they weren't trying to be funny... I think it was just lousy (over-)acting though.

The action is heavy on the Ching Siu-Tung style wires and whirling around, which occasionally manages to produce some beautiful movements, but at other times seems awkward and artificial. The director seems to have had the goal of imitating the work of Ching and other luminaries of the wu xia genre, when the thing that made Hong Kong wu xia so exciting was that the directors and choreographers were constantly trying to out-do each other with the invention and complexity of the action scenes. KIM doesn't seem to bring any of his own ideas or a personal vision to the table, unlike Zhang Yimou's recent forays into wu xia, for instance. He seems to lack ambition, being content to stop the cameras when he reaches "good enough".

The film does have some virtues - mainly some nice visuals... and I don't _just_ mean the close ups of gorgeous Yoon So-Yi, though being able to look at her for 90 minutes is possibly the thing I liked most about the film :-p I quite liked the lead actor too, and the babe from the bad guys.

Wu xia is a genre I have a special fondness for, and I almost never fail to enjoy a wu xia film to some degree. SHADOWLESS SWORD has enough flaws that in a different genre I'd probably call it a bad film, but the wuxianess of it made it at least watchable... that and Yoon So-Yi. It wasn't an awful lot of fun though, and failed to deliver much in the way of emotional punch or message of profundity. But... it's at least kind of pretty? :-)