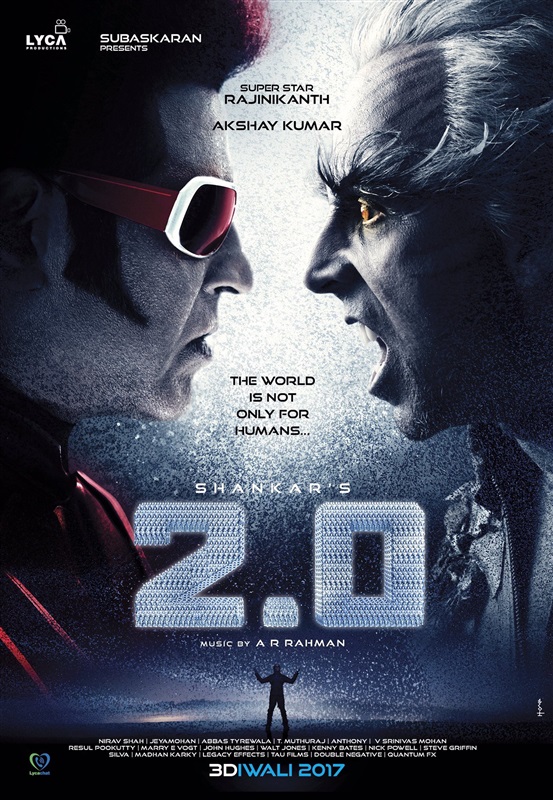 Birds (yes, those birds) use a 5th fundamental force to transform everybody's cellphones into a giant mecha bird seeking to destroy the mobile networks that are disrupting their navigation, and take revenge on the humans that built them.

In some ways this film is the inverse of ENTHIRAN, with all the early comedy scenes of the original gone, replaced by the more tragic story of a devoted ornithologist and his bird buddies. Chitti is dormant at the start of the film, and Aishwarya Rai only appears as a voice on the telephone. We are introduced to Rajinikanth's new big-titty android assistant played by Amy Jackson, but she is already settled and doesn't go through any of the "newborn" experiences Chitti had.

ENTHIRAN didn't really kick off until Chitti was transformed into 2.0, but things start with a bang this time round, and the first 90 minutes of the film is pretty action-packed. It reaches something of a natural climax where it could easily have ended, but then goes on for another hour... at least delivering a spectacular finale that justifies staying to the end.

Despite the prominent A.R. Rahman credit there is only one musical number in the film, and that's in the closing credits - it's a banger, but it would have been nice to have one somewhere in the middle as well. The film's real stars are the special effects, which are superb and creative, and Amy Jackson... who is just really hot.