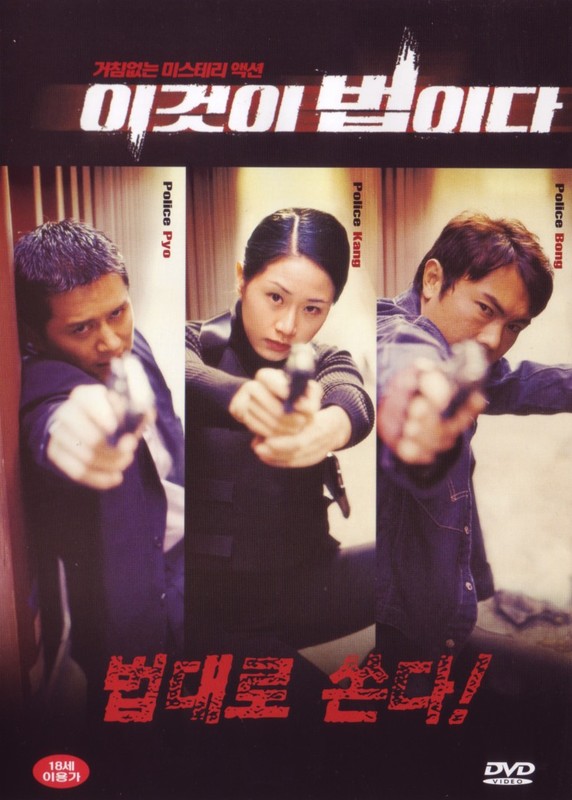 OK, I admit it... I'm a whore.  And not just because I have sex for money, but because I can never resist putting out for a movie about cops.  But I know I'm not the only one .  Really there's nothing cheaper or easier as a plot device than making your main character(s) cops or killers.  It's far easier to imagine an interesting story for a cop than it is for a computer programmer or tele-marketer, despite the fact that the audience is more likely to be in such a job.  I'd love to compare the statistics for occupation distribution and life expectancy between real world and movie world, just to see how much our entertainment misrepresents our lives.  Not that I'd have it any other way - the reason cops and killers are such movie cliches is because they make good movie material, after all.

This Is Law / Out of Justice is a cop movie, pure and simple and with no pretentions to be anything else.  It almost feels like part of a series, it's all so comfortable and familiar.  And in a way it is - part of the universal series of movies about cops on the trail of a mysterious killer.  Different characters, different locations, but ultimately the same as half the movies and tv serials ever made.

This time around, we get two groups of cops - a pair of homicide detectives and a group known as STF, which I deduce to be Special Task Force.  Both groups end up on the same case, when a series of bodies turn up with a signature - a tarot card left with the corpse.  The connection between the victims seems to be that they are all criminals who have somehow evaded punishment by the law.  The vigilante aspect coupled with the killer's self promotion via his own website means that he has quite a cult following.  But law is law, and our cops have to find out who he really is and stop him doing it again.

The basic familiarity of the situation means that the movie can leap into its complicated storyline without wasting too much time setting the scene.  We meet the characters, we follow some detective work, we let the story unfold.  The plot is pretty complicated - we get a lot of plot twists and turns and details... enough to quite overwhelm my poor little brain I must say.  The number of characters brought into the case is high, and I always felt like I was playing catch-up with who was who and what they were up to.  It felt like I was meant to know more than I did about what was going on.  Not to the extent that I was ever lost or overly confused, but enough to mean I was never in any danger of anticipating the way things were going to develop.  This takes some of the fun out of a mystery, naturally.

However, that's not problem enough to stop This Is Law being entertaining.  During the course of the movie we get a bit of action, a bit of suspense, a bit of character development and meaningful dialogue and even a hint of romance (and some gratuitous nudity!).  All the things that make it easier to make a cop movie interesting than movies about hairdressers or gardeners.  The characters are good, the action exciting, the romance unnecessary and the 'police procedure' doubtless wildly innacurate.  In other words it's an enjoyable movie about cops on the trail of a killer.

This Is Law is largely interchangeable with thousands of other movies, and there are certainly better movies even within the genre.  However, it hits all the right notes that make a cop movie enjoyable, and provides adequate entertainment throughout.  I'm sure that 3 days from now I won't remember the first thing about it, but for this evening at least it kept me quite happy and fulfilled.

aka OUT OF JUSTICE