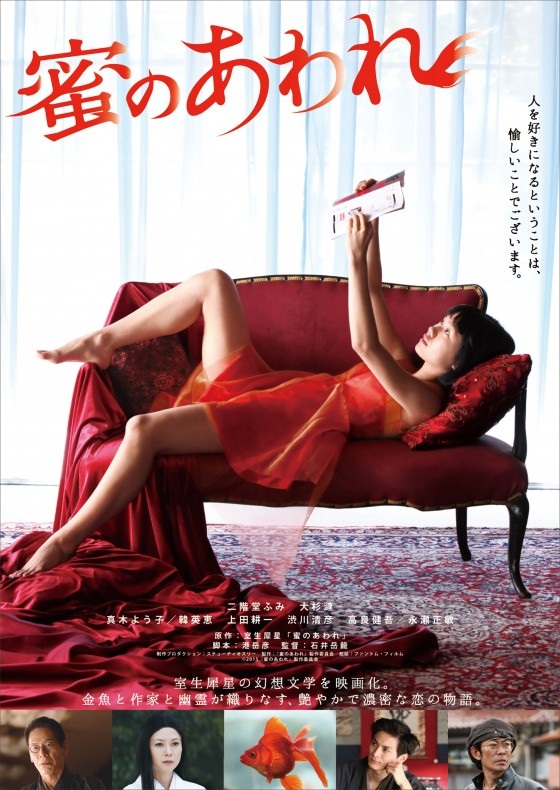 A writer (Ren Osugi) is in his twilight years, having been reasonably successful but knowing that his best work is behind him. Fumi Nikaido splashes into his life, quite literally as she is a goldfish - or a girlfish - and her innocence and playfulness reawaken something of his passions.

There are few things that writers like writing about more than writing, and assuming the film is faithful to the Saisei Murô novel on which it is based, it is not a story about a sexy goldfish but about the bittersweet relationship between a writer and the characters he creates.

To write well a writer must know their characters intimately - which entails spending a lot of time with them, mentally. Writers sometimes say that the story was written by the characters, they were just the conduit - they get to know them well enough to know they wouldn't say or do what the author had planned for them, and the author has to change the story to accommodate them. It shows when they didn't.

But eventually the work is complete and the author must move on, leaving the characters he brought to life to fend for themselves and giving himself over to the next set of characters he must create.

In the film the author thinks often of Ryûnosuke Akutagawa, the author of the stories that Akira Kurosawa turned into the film Rashomon. He recalls that author's easy confidence when they crossed paths in their youth and wonders if any of his own work can be compared to the genius Akutagawa displayed despite dying so young. I assume the answer is "no".

He begins to worry that he has failed his characters... that his skills were inadequate to do them justice, to tell their story as they themselves might have told it. He feels guilty about abandoning them when the story was finished and leaving them to their fates... he begins to wonder if it might have been better if he had never created them at all.

But then he remembers the joy that spending time with them brought him, and the joy he was perhaps able to give them - at least some of the time, and feels grateful that he was able to know them, so intimately, however briefly.

Fumi Nikaido is simply astonishing as the girlfish, a mesmerising performance - she wears the entire film like she wears that diaphanous dress. Ren Osugi is great too, his decades of experience as a supporting actor meant he knew exactly when to step back and let Nikaido shine. The two of them seem to have a genuine chemistry.

Gakuryu Ishii does a good job of bringing the story's metaphors to life, with luscious cinematography and production design - his films are always visually striking and this is no exception. We don't talk about him enough.