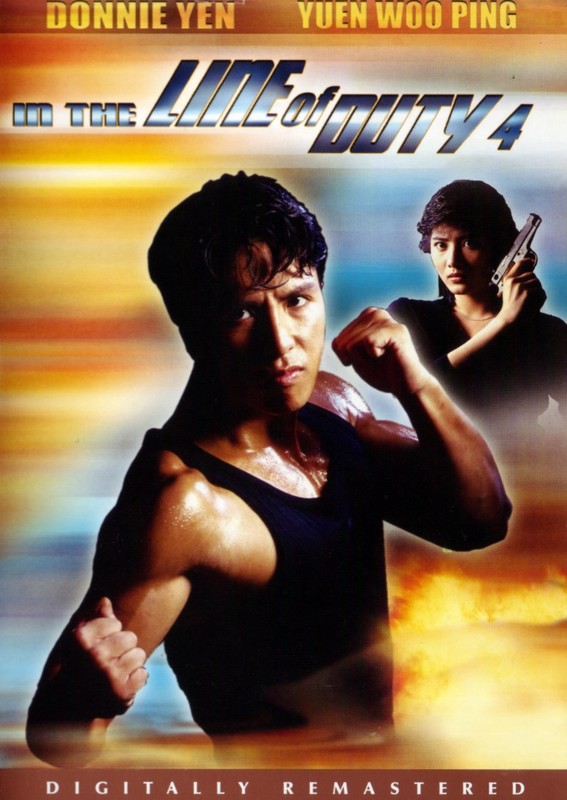 In The Line Of Duty IV sees the illustrious girls-with-guns series take a bit of a detour as Yuen Wo-Ping steps into the directors chair, and brings along with him a fair old entourage of mostly male actors/fighters, meaning that leading lady Cynthia Khan's role is a little diminished, with Donnie Yen and Yuen Yat-Choh (brother of Wo Ping) having at least as much screen time, lines and fights. Wo Ping's regular cast does represent many of the top fighters of the time from around the world, though, which means that Part IV is possibly the most action-packed entry in the series, with fights almost non-stop from the moment the opening credits finish.

ITLOD4 is one of the perfect examples of a Hong Kong film, in that it's the kind of film that just doesn't get made anywhere else in the world. The multinational cast, the melodrama and high cheese factor and especially the bone crunching action all have that unique "only in Hong Kong" feel, and the use of some great HK locations and motifs really does make this film sum up what made HK cinema in the 80's so great. If I were working on a game for PlayStation 2 influenced by Hong Kong cinema, this film is what I would want to make that game feel like ;-)

Surprisingly enough, ITLOD4 even features a good story, with good characters and a relatively high degree of continuity. The idea of CIA operatives selling drugs to fund operations in South America is quite entertaining, and there is an unusual but rather amusing level of anti-Americanism to be found in the film, most blatantly in the final shots. Of all the characters, Yuen Yat Chor's is probably the one with the most depth - an honest guy caught up in a crazy situation where cops and robbers both are on his tail, he's a good everyman sort that the audience can relate to. Cynthia Khan is the hero archetype, a model of virtue and courage out there to protect the innocent - a character to give the audience hope. Donnie's character is the one who goes through the most development - his black and white world-view and hot-headedness are challenged by the events that unfold, and he has to learn and grow. Needless to say, all 3 are in conflict with each other at the start and finally realise they have to work together to win in the end. Somebody will probably read a political message into this, but I think it's just a well-chosen set of old-fashioned character archetypes.

Anyway, story - pretty good, acting - pretty good, but this is really just a bonus that adds a little more emotional impact to the many action scenes. This is where the film comes into its own, and it's what makes it truly great. Yuen Wo-Ping is of course one of the best action directors of all time, and here he seems to have a big budget and plenty of talent on hand to stage many memorable fights, shoot outs and stunts. Donnie Yen gets the bulk of the action, and he's on great form here. This may be his best role, both as an actor and a fighter. Cynthia Khan gets to kick a fair amount of ass too, and she's also impressive though clearly doubled quite a lot. Their main opponents are Donnie/Wo Ping regulars Michael Woods and John Salvitti but there's dozens of other bit-parts and stuntmen to provide fodder. The choreography is dynamic and varied, with the fighters using a wide range of styles and moves. It's all filmed and edited beautifully, and the result is simply some of the best action you're likely to see. They don't make them like this anymore, as they say (with good reason!).

If you were given the challenge to pick one film that best summed up what makes (made) Hong Kong's film industry so special, well... there are many films you could choose, depending on your own particular views and tastes, but if you ended up choosing In The Line Of Duty IV then I don't think anybody could really say your decision was a bad one

Bottom line: you must see this one at some point!