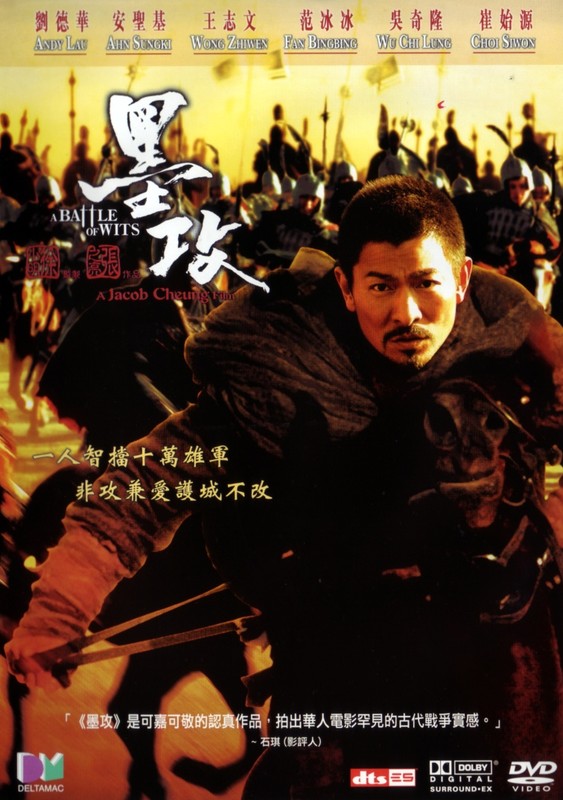 The kingdom of Zhao is on its way to invade the kingdom of Yan, and they figure they might as well stop and take over the tiny kingdom of Liang whilst they're passing. The Liang King is all set to surrender, since their 4000 men can hardly stand up to Zhao's 100,000 troops... but then help arrives. It seems the Mozi have answered their call for assistance... but they've only sent one man. That man is strategist Ge Li (Andy Lau), however, and he persuades them that surrender isn't going to turn out as nice as they think, and that with the right plan they can defend themselves from the invaders until they get bored and go away.

A BATTLE OF WITS is the latest Asian historical epic co-production, adapted from a Manga and with talent from Hong Kong, Korea and Mainland China on both sides of the camera. The director is Jacob Cheung, who has an odd little filmography of mostly small art films and dramas - nothing to suggest he had a historical epic in him, but we've said that about enough people now that we should probably stop being surprised. It sometimes seems that the bigger the budget, the lower the IQ the film demands or encourages. A BATTLE OF WITS looks pretty expensive, but thankfully does not seem to have let the money go to its head and displace its brains. As the title implies, it's a film about ideas as much as bloody great battle scenes. As the script writer, Cheung infuses his film with a little bit of politics and a little bit of philosophy, but keeps things in relatively commercial territory for most of the film... a gratuitous romance angle being the most obvious concession to mainstream audiences (or perhaps it was just a good excuse to get ultra-hottie Fan Bing-Bing on set and on screen... or perhaps that's the same thing, and I'm more mainstream than I thought :-p).

Andy Lau grows ever more respectable as an actor it seems, giving his character the sort of charisma and respectability that few actors could manage... and he's still ridiculously handsome with it, damn him! Korean actor Ahn Sung Ki is as grizzledly cool as ever as the leader of the opposing forces, and it's great to see HK veterans Wu Ma and Chin Siu-Ho getting work again. The film unquestionably belongs to Andy though.

The movie definitely has some issues - for instance, Ge Yi is perhaps 'too perfect' as a character, buddha-like in his pacificism yet unerringly wise in military strategy and psychology. This leaves him relatively little room to grow and develop as a character, though he does manage something of an arc - mostly thanks to Fan Bing-Bing's character, which I suppose negates my next criticism, which was going to be that the romance angle seemed gratuitous and tacked on. I suppose there was a point to it besides Fan Bing-Bing being so very, very attractive after all... but, perhaps it could have been handled better.

The other main source of criticism is the occasionally dodgy CGI. There's quite a lot of good CGI in the film - the kind you don't notice - but a few scenes do look rather fake. This would apply to the biggest of the battle scenes mainly, and is rather inevitable when you choose to show hundreds of thousands of soldiers on screen at once. I do sort of wish people didn't feel it necessary to do that these days - it was a simpler, happier world when they had a few hundred people in costume running about in a field instead. In fact, they do this in WITS most of the time - actually thousands of real live people in places... which is one reason it stands out so much when they do cut to a CGI shot to show the entire army. Apart from those few shots, though, the battle scenes in the film are very impressively done.

It's impossible to make or review a historical epic without invoking the spirit of Akira Kurosawa, and A BATTLE OF WITS shares obvious similarities with Seven Samurai and YOJIMBO in places, but I guess it's the nature of the beast that it should be so. It never feels like a 'homage (cough cough)' to any other film I can think of - it's not a radical departure from the form of 'historical epic', but it's definitely itself... and it's pretty good. In fact, there are parts of the film that are absolutely great film-making, really powerful stuff; then there are others that are a bit corny, or don't quite 'ring true', and bring the score down to... 8/10