Directed by
7/10 - Dated but enjoyable 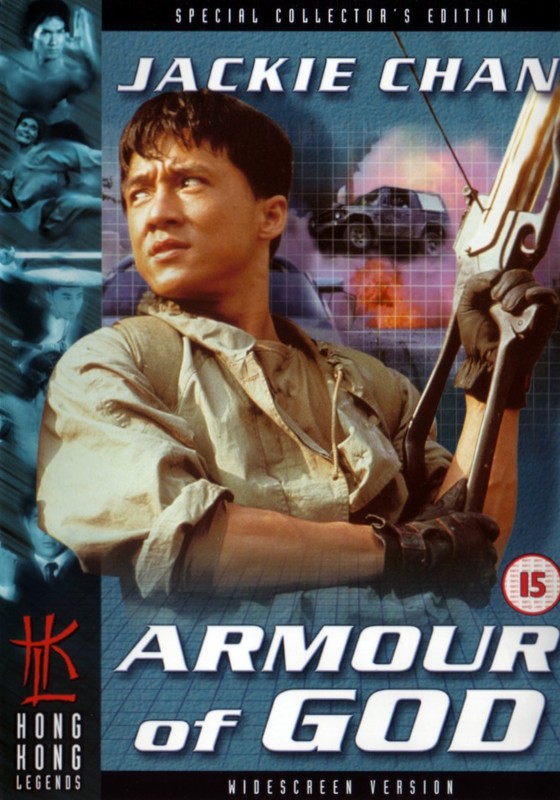 People who complain about recent Hong Kong big-budget actioners with international locations should remember that it's nothing new... there was plenty of it in the eighties too, and ARMOUR OF GOD seems to be one of the biggest, and most of it was shot on location somewhere in Europe (a Europe where everybody speaks Cantonese though). You can tell they had more budget than sense when they have a leopard on a chain for no obvious reason. Jackie plays Asian Hawk, an Indiana Jones style adventurer who used to be in a wonderfully 60's pop group. The group appears to have split up when Jackie lost fellow band member Rosamund Kwan's affections to co-singer Alan Tam. Now he runs around the world collecting treasures.

A mysterious evil cult in Europe takes an interest in Jackie after he manages to find/steal several pieces of the ARMOUR OF GOD, apparently a suit of armour forged in ancient times with holy power to defeat evil or something. The cult kidnap Rosamund on the theory that they can blackmail Jackie into getting the armour for them, which they will then use for nefarious purposes.

The production is pretty slick, with a suitably evil cult and good character dynamics between the heroes. There's good use made of the European locations, and plenty of action sequences with Jackie as the main star. Quite a few stuntmen get dropped from dangerous heights to land in awkward positions, producing much audience wincing. The first time I saw the film I wasn't particularly taken with it - in particular the set piece fight with Jackie against 4 black women in amazonian costumes and make-ups just seemed so dated and ridiculous it quite turned me off. This time round I enjoyed it more, appreciating the way the story sped along with only a few pauses for comic relief. The fight with the women also seemed much less artificial, and I was less aware of the obvious stunt doubling. It's actually pretty intensely choreographed, with all 4 women attacking in complex unison.

Overall, a minor landmark in HK movie making, and quite an enjoyable watch. As always, much respect to Jackie Chan.