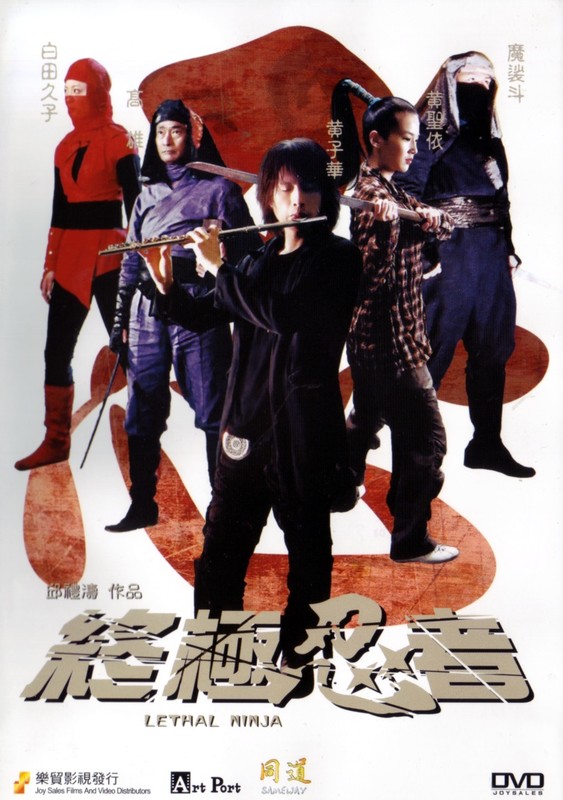 There are few things in life that can't be made better by adding ninjas. I can picture the meeting well, where Herman Yau and his team concluded "we're going to need a lot of ninjas to make this turkey fly". And thus it is so... ninjas are everywhere you care to look in this film (which is quite unusual for modern day Hong Kong, I'd have thought). Admittedly some of those ninjas are quite drippy, like Eva Huang, but they're still ninjas - and that counts for something... luckily, since this film would be beyond contempt without them!

You know somebody got desparate when they have to cast Dayo Wong as the lead man, and have him pretend to be a brilliant flautist (look it up!) called... Copy. It's not even bad subtitles either, it says it on screen in English. Perhaps it was the set up for some brilliant joke or satire that they forgot to actually film.

There is an aspect of Hong Kong cinema which can be quite disturbing - chiefly the tendency to pair up teenage girls with men twice their age. LETHAL NINJA never quite commits to whether Dayo and Eva are meant to be a romantic pairing, but the thought is disturbing enough that they should have had a disclaimer in the closing credits stating their relationship will remain platonic. No, make that the opening credits, to pre-empt the thought.

It's not quite clear what audience LETHAL NINJA was aiming for. In some ways it feels like a kids' film, but then has quite a lot of ninja-related violence (and CG blood). Perhaps they were aiming for teenagers like Eva Huang, in which case why cast Dayo Wong? Who knows what they were thinking... the film is a HK-Japanese co-production, so perhaps they just couldn't communicate very well.

Anyway, the end result is a film that's banal but full of ninjas, some of whom are not peace-loving hippies and do cool ninja tricks, then kill people. So overall, that's about a 5/10