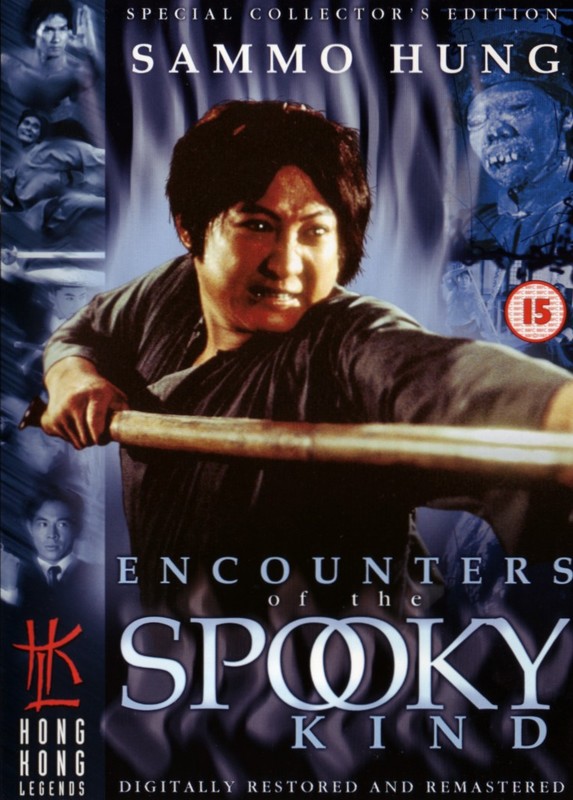 Simply put, ENCOUNTERS OF THE SPOOKY KIND is one of the finest movies that Hong Kong has produced. It was perhaps the peak of Sammo Hung's creative run as a director in the late 70's and early 80's, skillfully blending so many elements into a tremendously entertaining movie.

The plot is perfunctory here - really it is just a set up for the various encounters, mostly of a spooky kind. Sammo plays a character not dis-similar to that he played in other movies around the same time (e.g. The Victim, Enter The Fat Dragon) - a good natured but simple, fat but agile ordinary joe. He gets involved in some very extra-ordinary situations as the result of his wife's infidelities.

Peter Chan Lung plays the taoist wizard paid to get rid of Sammo, and the wonderful Chung Fat plays the good taoist that helps Sammo to survive his encounters. The movie features the fascinating taoist ritualistic magic sequences that would become Lam Ching-Ying's trademark in later years (although Lam Ching-Ying is in the movie, he does not get to play Vampire Buster this time around, just an upright and dogged police officer). I have no idea if the cinematic form these rituals tend to take bears any resemblance to real rituals, but they do look cool as hell.

In and around all the magic we get a fair dose of comedy (this is a Sammo movie after all), much of which is genuinely amusing, and some totally kick ass action scenes. The supernatural element gives Sammo the perfect excuse to be really creative... possession by different spirits gives the characters unique fighting styles, vampires hop around with their own unique attacks, and there's a fair amount of wirework with all the spirits in the area. None of this, however, quite matches the sheer genius of Sammo's fight scene with... his own hand :)

The production was obviously a big budget investment for the time - not surprising since Sammo was the golden boy of directors in Hong Kong at the time. He certainly made sure the money was put to good use too - the sets, costumes and overall production design are immaculate - the movie feels much more contemporary than most other HK movies from the same period (e.g. Shaw Brothers offerings). It also features some pretty neat special effects - incredibly dated in the 21st century, but very good by 1981 standards. The movie is rounded out by a tight(ish) script, great cast, some excellent and innovative camera work and a general keen-ness that shows just how sharp Sammo was in the days when this movie was made.

In most people's career, ENCOUNTERS OF THE SPOOKY KIND would be the kind of movie that a director would never live down. "Good but not as good as SPOOKY ENCOUNTERS", he would doubtless get tired of reading in reviews. I do actually think that EOTSK probably is Sammo's best movie after THE VICTIM, but in a long career there have been so many highlights that neither of these excellent movies stand out particularly in his filmography - though put next to most other movies of the time they positively shine.