Directed by
7/10 - Probably better than it should have been 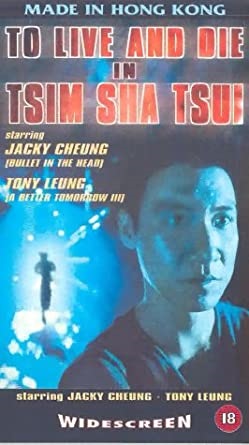 Undercover cop Jacky Cheung feels his loyalties begin to tear... can he really betray the Hing Dai who treats him well, to please a superior officer who seems solely intent on furthering his own career and fucking Jacky's girlfriend? The conflicted undercover cop story is almost a genre in its own right, and TO LIVE AND DIE IN TSIMSHATSUI doesn't deviate too much from expectations. The Triad brothers Jacky must betray are almost conspicuously honest and decent (do they ever commit any crimes in the film? Their source of income remains mysterious) and the self-serving superior officer is entirely unsympathetic even before he worms his way into the girlfriend's knickers. When it's announced that Jacky's original superior is retiring in three days, we know what his fate will be long before he casually declines the offer of a bullet-proof vest when leading a raid on a Triad safe-house.

Still, despite an excess of predictability and a subtext that sometimes reads like a Triad recruitment film (wonder who bankrolled it?), TLADITST works quite well. The characters have just enough personality to give the actors something to work with, and most of them do a good job of getting into them. The story is melodramatic but engaging, and the whole thing is visually very stylish (as you'd expect from Andrew Lau - fresh from shooting Chungking Express by the looks of things).

TLADITST was actually one of the first Hong Kong films I saw, and it made a strong impression at the time. 15 years later I'm a more experienced and critical viewer, and the film's flaws are more obvious to me, but I still enjoyed watching it. Credit for this primarily goes to Wu Chien-Lien, Jacky Cheung, Roy Cheung and Tony Leung Ka-Fai (in that order) for getting into their roles and taking the film more seriously than it perhaps deserves, and thereby giving it just enough substance to overcome any lack of it in the base material.

The film is more or less impossible to find, as far as I can tell - somewhat surprising given a fairly respectable cast and the director's future popularity. Glad that the VHS tape I recorded off Channel 4 and recently found in my mother's attic still played fine.