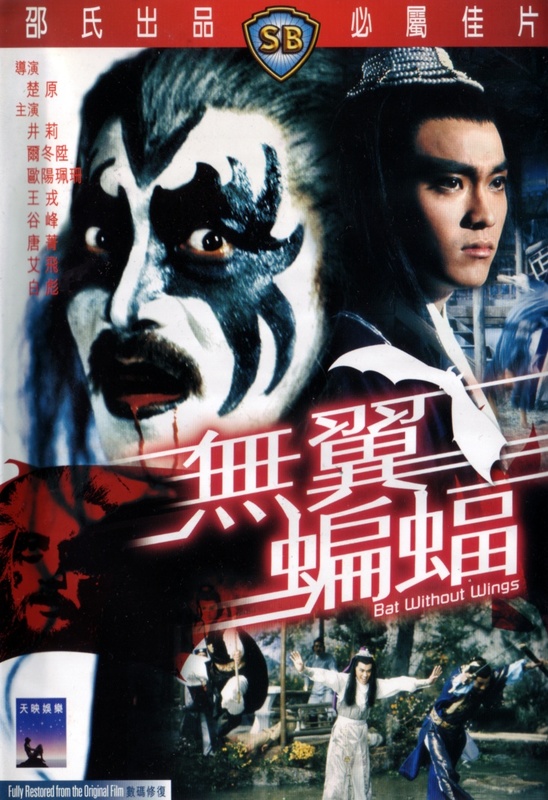 A villain, known as Bat Without Wings due to his eerily familiar makeup, rapes and murders a number of women, so 28 heroes set out to take him down. Only two survive, but The Bat is finally defeated. Five years later a powerful martial artist claiming to be The Bat appears in the jiang hu, and a beautiful woman hires up and coming swordsman Xiao Qi to find out if it's really him.

This is another Chor Yuen adaptation of a Ku Long novel, a little more gothic and macabre than most, but not adding much else that's new. Chor Yuen wrote the script himself, which tends to be a bad sign, and it is basically just a series of plot points delivered without much drama or emotional depth.

The production feels unusually cheap, with the fancy sets and costumes that you would expect being present but cut down in scale, as though they were a bit rushed, with too much reliance on smoke and coloured lighting for atmosphere. It feels like everybody was a bit tired of making these films by this point and were just going through the motions... even the action isn't particularly interesting, despite Tang Chia and Huang Pei-Chi's involvement.

It's probably unfair to point out that the Chor Yuen films with Derek Yee in the leading role are never as good as the ones with Ti Lung since it's not really his fault, but it is true. He's a good looking chap with decent kung fu, but he doesn't have the same magnetic charisma as Ti Lung and tends to be rather po-faced, so he's not entirely innocent.

Most of the characters in the film are quite dull and the cast do little to make them more likeable, with the always reliable exception of Ku Feng... it's not necessarily a bad thing when the villain is the most interesting character in your film, as Lo Lieh's wonderful performance in Human Lanterns proves, but it's definitely better if the good guys also have some qualities that make them memorable.

Still, the formula for these wuxia detective fantasies is pretty robust, and I am probably incapable of actually disliking them... this definitely isn't one of the good ones though.