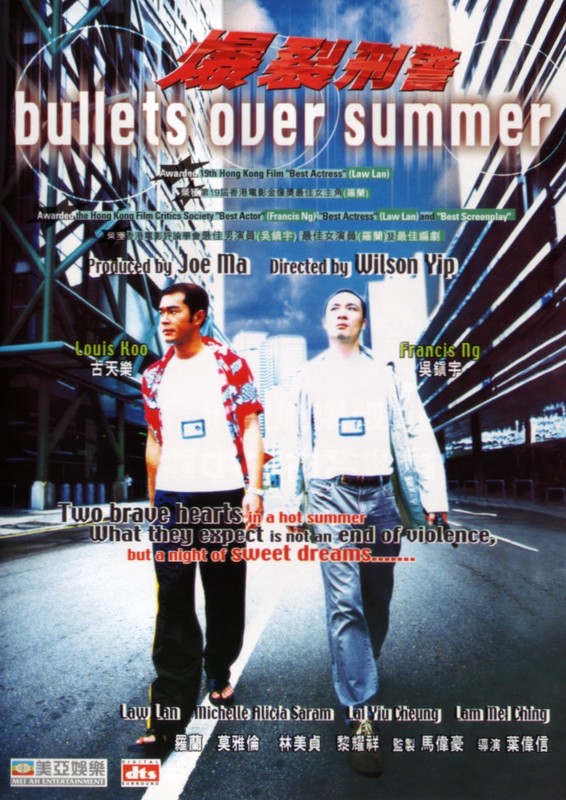 Francis Ng and Louis Koo take up residence in Helena Law Lan's flat for surveillance of a suspected arms dealer. Through age or loneliness, Helena confuses them with the grandchildren she never gets to see. Francis is perhaps happy to play the role, having been an orphan. Together with the young women they meet, they learn that family can exist without blood ties.

BULLETS OVER SUMMER is a smart, well-written, character-driven piece filmed with style and maturity by Wilson Yip (on a presumably shoestring budget). Francis gives a wonderful performance (I believe he won the Best Actor award for it), and Helena Law Lan is unnervingly convincing in her character's senility.

As many have observed, the ending of the film is... well, let's say confusing. It's not entirely clear what happens, or why, and it seems to undermine or contradict what has come before it. It bothered me a lot less than it has other reviewers, but I'll admit that endings have not been Wilson Yip's greatest strength. Of course, after this film and the even better Juliet In Love, Wilson Yip got a severe case of big-budget poisoning and we began to wonder what, if anything, his strengths were after all. I haven't seen SHA PO LANG yet, but it sounds like it may be a return to form - I hope so, as he showed such great promise in this film I almost take it personally when he releases something so utterly opposite as Skyline Cruisers or The White Dragon!