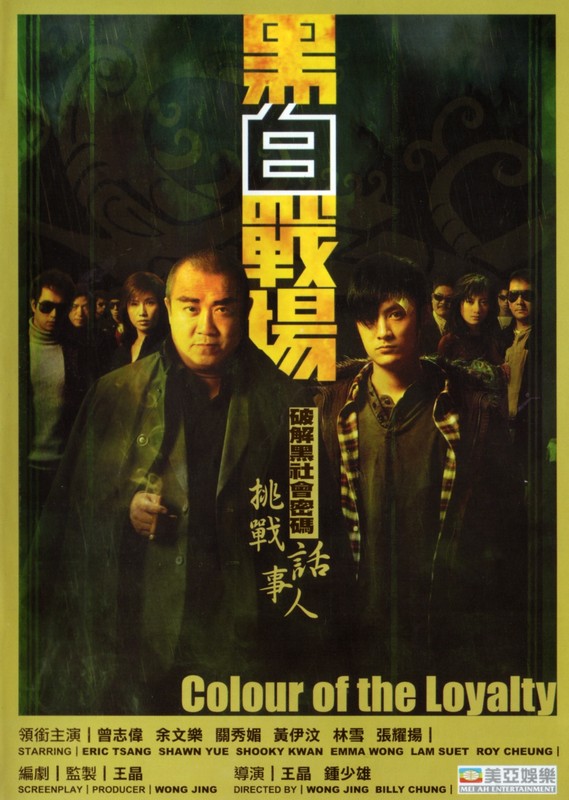 One of the fun things about Hong Kong cinema is trying to guess which films are sequels to each other - COLOUR OF THE LOYALTY sounds like it's going to be a sequel to Colour Of The Truth, then has nothing to do with it whatsoever. Awesome. Perhaps Wong Jing is paying homage to Kieslowski's famous Three Colours trilogy, and we'll soon be treated to COLOUR OF THE JUSTICE or COLOUR OF THE LIBERTY?

Wong Jing has never been shy about his homages, to the extent that some unreasonable people have accused him of stealing from other films on occasion! Actually he's just borrowing them, and has promised to return them all when he's finished with them. COLOUR OF THE LOYALTY borrows from a number of sources, including The Mission, Jiang Hu, the other JIANG HU (THE TRIAD ZONE) and probably many others, but there's been enough cross-borrowing in the Triad genre that it's hard to say where any one idea comes from. The basic premise is that there's a contract out on Eric Tsang's life, and a group of outsiders are brought in to protect him, since he doesn't trust his own men. The film does a good job of keeping you guessing who's behind it all, and where the next threat is going to come from. This may be because it doesn't make a lot of sense when you get to the end, but I'll worry about that if I find myself watching it again.

The film is pretty stylish, and brutally violent in all the right places. The gangsters are all cool if completely one-dimensional, with the women in the cast being left with the task of expressing emotions and other girly stuff like that (actually that's not fair to Eric Tsang, he gives a pretty passionate performance). Shawn Yu is the main lead, and he shows again that he's got potential as an actor, though he's not quite there yet. Eric Tsang compares him to Chow Yun-Fat at one point, and you can sort of see that's how he's meant to be acting. Maybe in a few years he'll be able to pull it off, once he comes out from under that fringe of his.

Lam Suet and Roy Cheung are obviously familiar faces and they've played essentially the same character dozens of times so there'd be a shock if they couldn't carry it off here. Suki Kwan struggles with her character, unfortunately - she's a decent actress in the right role (e.g. A Gambler's Story) but wasn't quite right for this character. Apart from those and a brief cameo from Chapman To, I don't think I recognised anyone else in the cast! A couple of people probably weren't HK actors because they were redubbed into Cantonese even though the film is mostly shot in sync sound. Maybe there was some overseas investment, which often comes with the requirement to cast some actors from the investor's country.

To summarise, COLOUR OF THE LOYALTY is a pretty entertaining and well put together gangster film that can't count originality as one of its strengths, and probably wouldn't stand up to a deep analysis of logic behind the plot. It's not classic material, and not quite as enjoyable as COLOUR OF THE TRUTH, but it's worth a watch :)